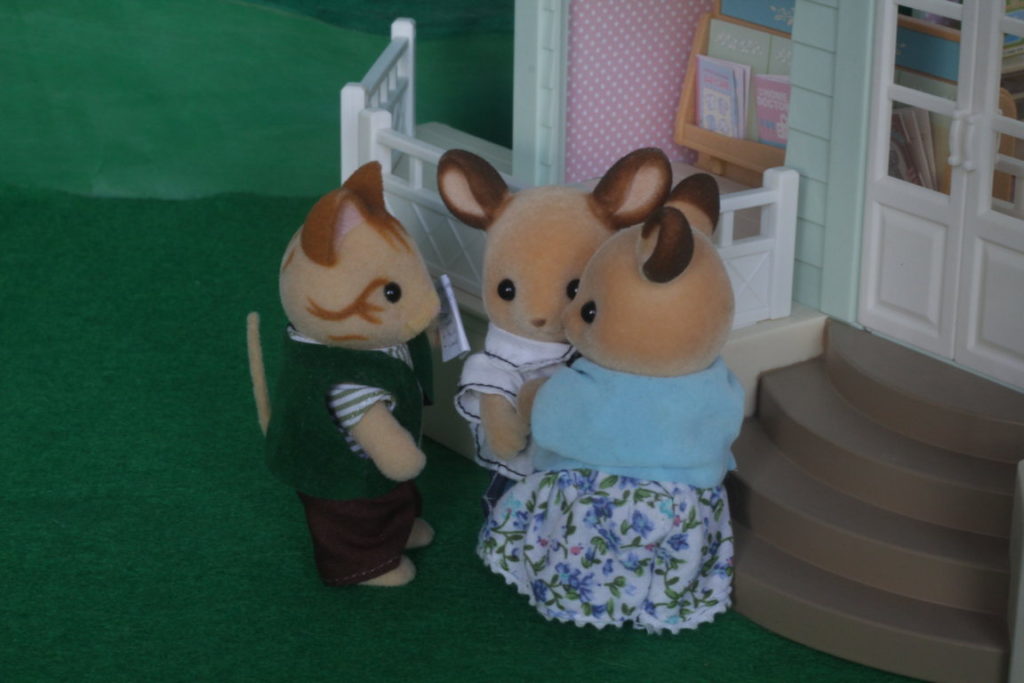 “Now, now Agatha. Do calm down. It won’t help if you fluster around like that! I am sure that people will come to the meeting today as many people do really want to help you get your house in order. Cameron has really done a great job.” said Elliot Beaman, referring to the article that appeared in the Daily Dandelion the day before.

Agatha Buckley was tightly holding onto her husband’s shirt as she was very nervous. The villagers so far had been very much willing to help them renovate their house but what if they had changed their mind? Agatha was quite worried that no one would want to help them after all and that she would have to spend the winter in the drafty cottage which they owned. 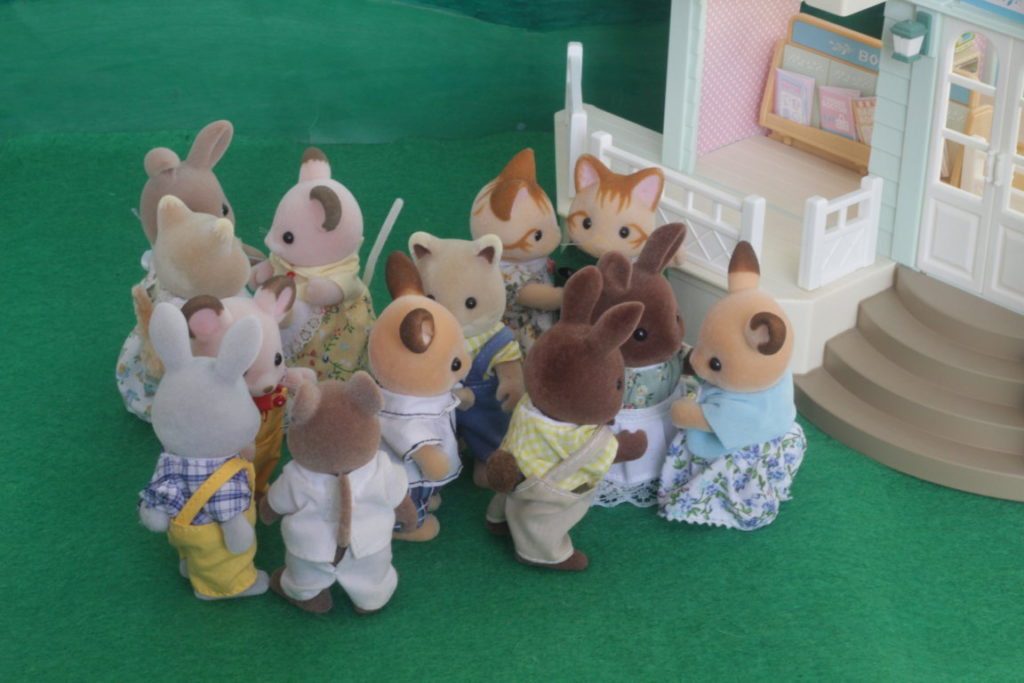 After a few minutes, and to Agatha’s great relief, sylvanians started to gather in front of the Country Market. First of all came Ginger and Herb Wildwood. Ginger immediately gave the doe a warm hug. She always smelt of cinnamon and spices which was very soothing. Then came Slick and Velvette Slydale, then Herbage and Theodora Dappledawn, then Aaron Cottontail, then Henry Hazlewood, then Darcy and Bridget Fielding and then Evangeline Beaman.

“I was talking to Alonzo Macavity this morning, he is coming and so are the Dante’s, they are even bringing little Larkin!” Evangeline chattered and then noticed her husbands shirt. “Elliot! Look at the state of your shirt! It has wrinkles in it! Goodness, how many times do I have to tell you to hang up your shirts so that your ironed shirts stay nice and wrinkle free? Really, you can’t give a speech looking like that!” and she began fussing and tugging at the shirt. Evangeline greatly cared about a tidy appearance and would not stand anything which did not look neat and tidy. 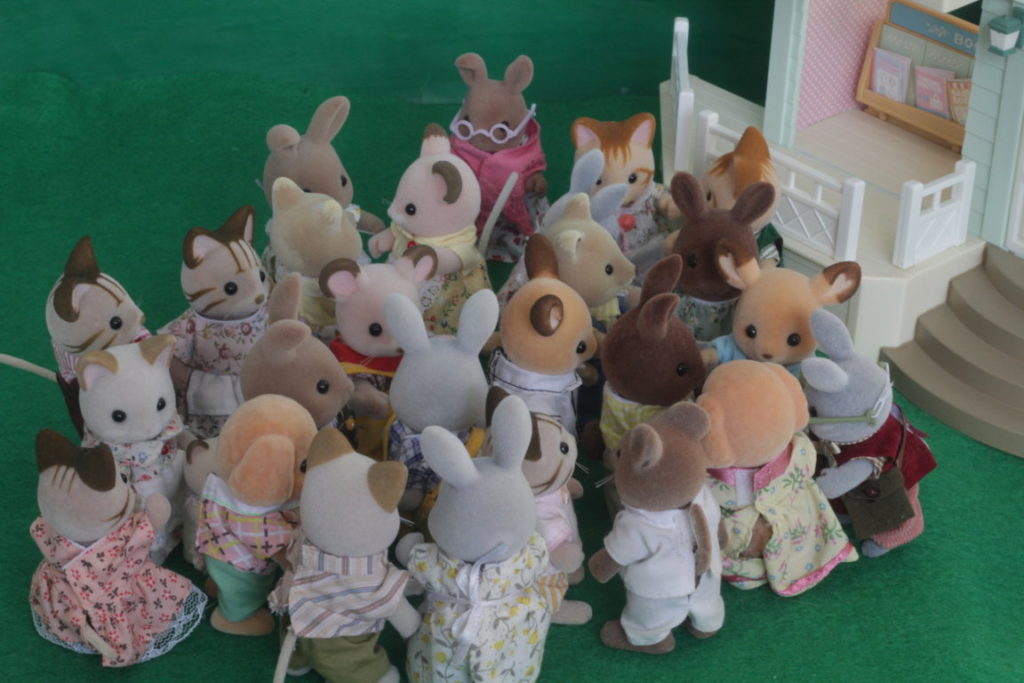 Soon, even more people were arriving in front of the Country Market, all chattering excitedly about what they had read in the Daily Dandelion about the meeting here today.

“I hope that I will be able to help Agatha and her family, she is such a lovely woman and I would like to help with the sewing that needs to be done. I have also sent a letter to my old friend Annette Grasshill who lives in Seashell Bay to see if there is a willing seamstress there.” Clara Macavity, the oldest daughter of Alonzo and Caroline Macavity said. As she was nearly an adult, she felt that it was appropriate to refer to Mrs. Buckley as Agatha, something that she was very proud of.

“What a good idea! I will write to my sister to see if she knows anyone in Thistle Meadows who will be willing to do some sewing.” Primrose Dante replied eagerly.

“I want to write a letter too!” little Larkin Dante squealed cheerfully, she was really a lot happier and energetic since she was adopted by the Dante family.

“Well darling, you are a bit young to write a letter. You don’t learn how to write letters until you are in school, and you are a bit too young for that.” Primrose reasoned. She saw her daughters disappointed face and then quickly added “But, you can create drawing for your Auntie and write your name on it and I can post that with my letter. Your Auntie would like that.”

“Oh yes! I will do it right now!” she exclaimed.

“You can after we hear what Mayor Beaman has to say. Then I can take you to the Nursery where you can use the paints and special crayons to make your masterpiece. Would you like to do that?” Primrose asked.

“Yes! And then we can eat cookies and drink hot chocolate at the Bakery!” Larkin giggled.

“We shall see darling.”

Clara smiled, Larkin was such a sweet little girl. She couldn’t wait until she might have a daughter of her own someday. 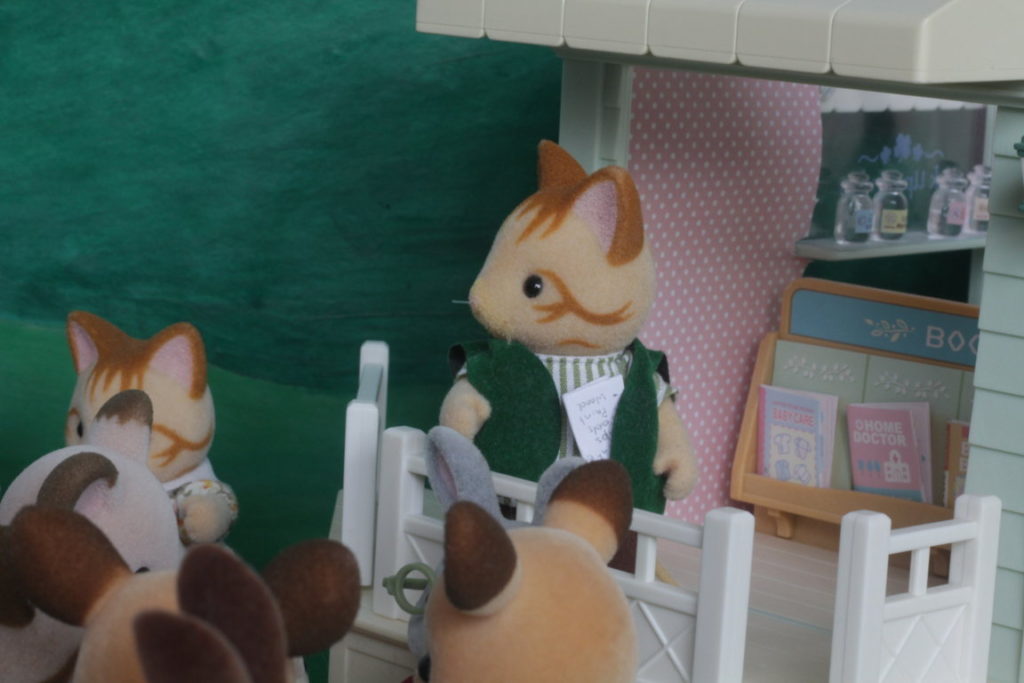 Mayor Elliot stood on the balcony of the Country Market and watched as sylvanians streamed towards him. Most of them were adults as the children had school but as he watched, he saw that a few children followed Aristotle Treefellow (the teacher of the local school). Evidently, some of the children had convinced their parents to write them a note so that they could go to the meeting and coincidentally miss out on some school. Elliot felt around his jacket to make sure that his notes for his speech were there, reassured that they were still there, he let his hands drop back down to his sides. 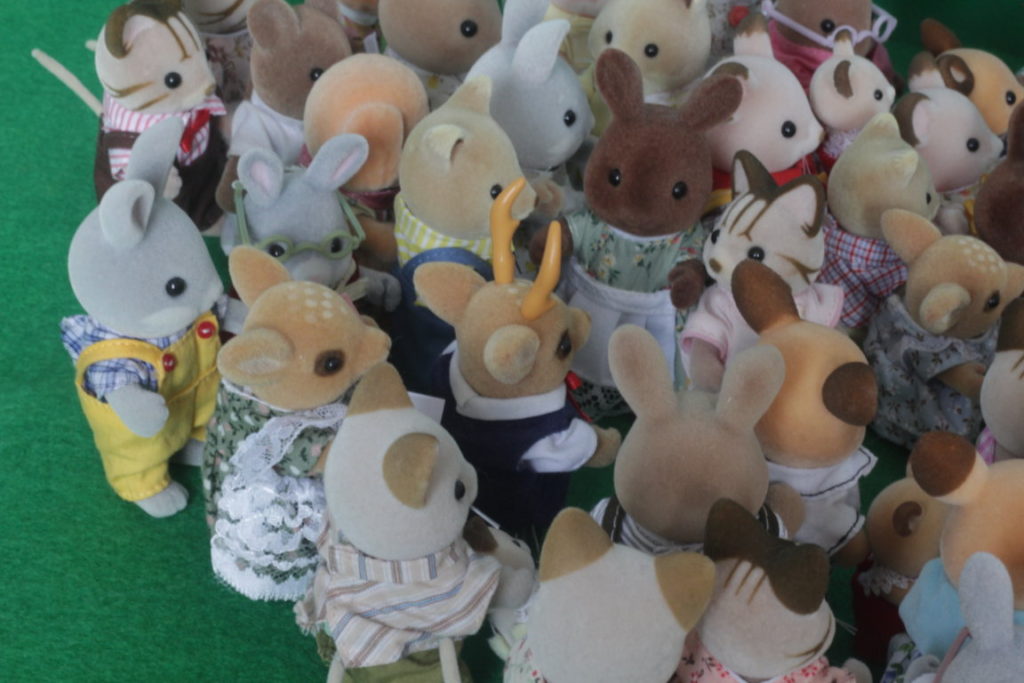 “You are not setting a very good example for my students Mr. Moss” Aristotle commented, “The students here today are to act as reporters and then report back to their groups and write an article on the days events. You are not setting a very good example by barging your way through the crowd, not only is it highly disruptive and disrespectful, it also makes it look like it is okay to act in that way when you are a reporter, which it is not. You should really be more considerate Mr. Moss.” he went on.

Cameron looked a tad embarrassed and then quietly made his way to the edge of the crowd.

“I am so sorry about my husband Aristotle, he does get a bit…, well, you know, overexcited when there is an event.” Rowena explained “I would love to see the articles that the children will write, maybe we can print the best ones?”

“Good idea Rowena, I will give you the articles next week when they are finished.” Aristotle agreed. 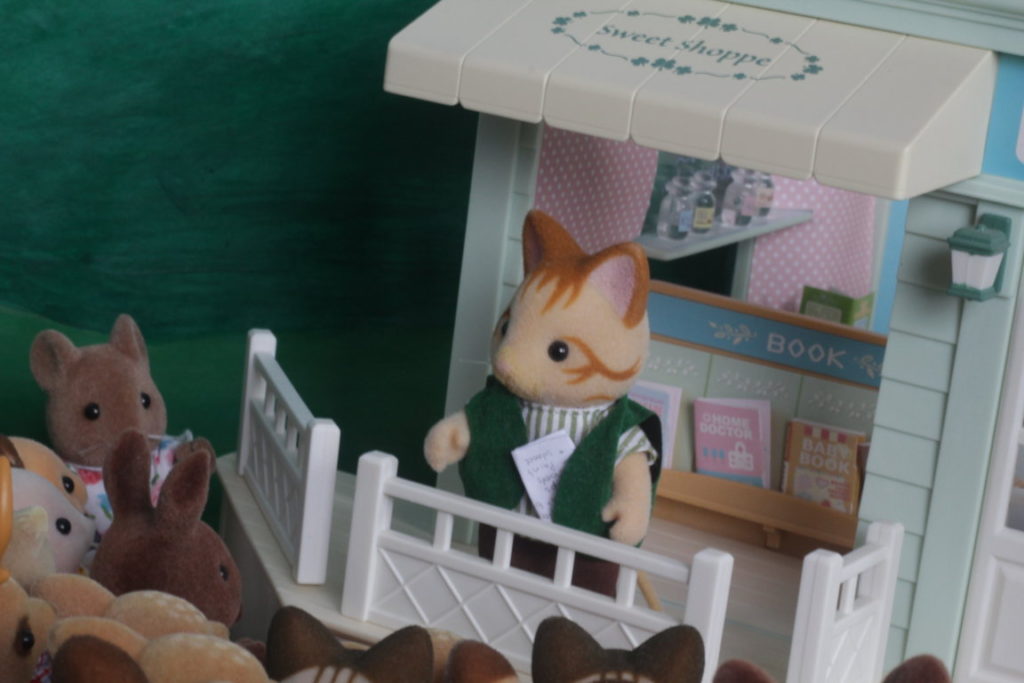 “Aha!” thought Elliot, “So that’s why some of the children are here“. He cleared his throat and then began his speech. 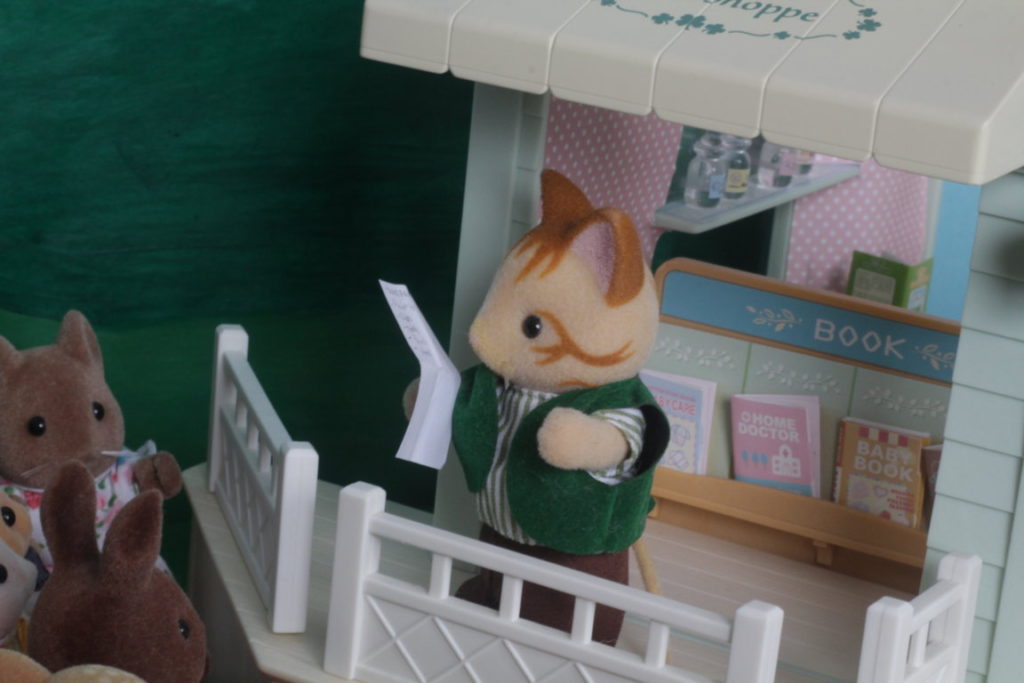 “Good morning villagers of Dandelion Creek. We are gathered here on this cloudy and overcast day to arrange groups of people which will be responsible for different tasks concerning the Buckley house project. There are many jobs that need to be done and they should get done quickly as we want the Buckley’s to have a nice home which they can enjoy. We also would like this project to be completed before the winter arrives as a tent is not a very warm place to be in the snow. I encourage that every one of you perform some sort of task, you never know when you may need the help and support of the village. Not all jobs are physically demanding, there is also the styling and choosing of paint colours, the gardening, providing food and many more. I am sure that there is something for everyone. I would like to arrange all of you gathered today with the exception of the children into groups so that I can arrange a time table that will work for you and that I can keep everyone and everything nice and organized” 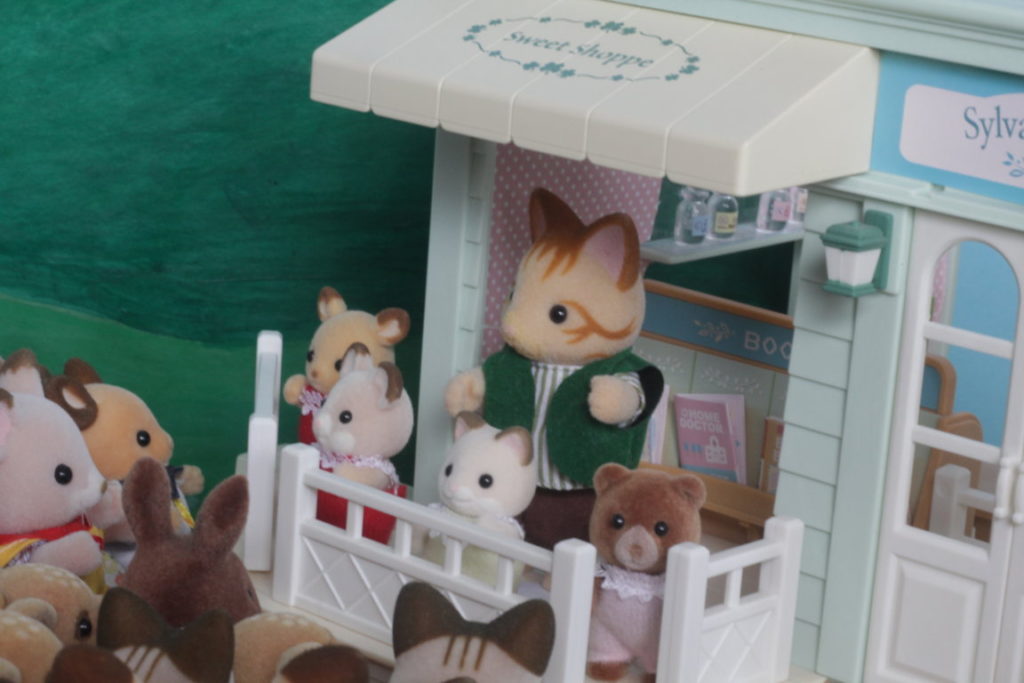 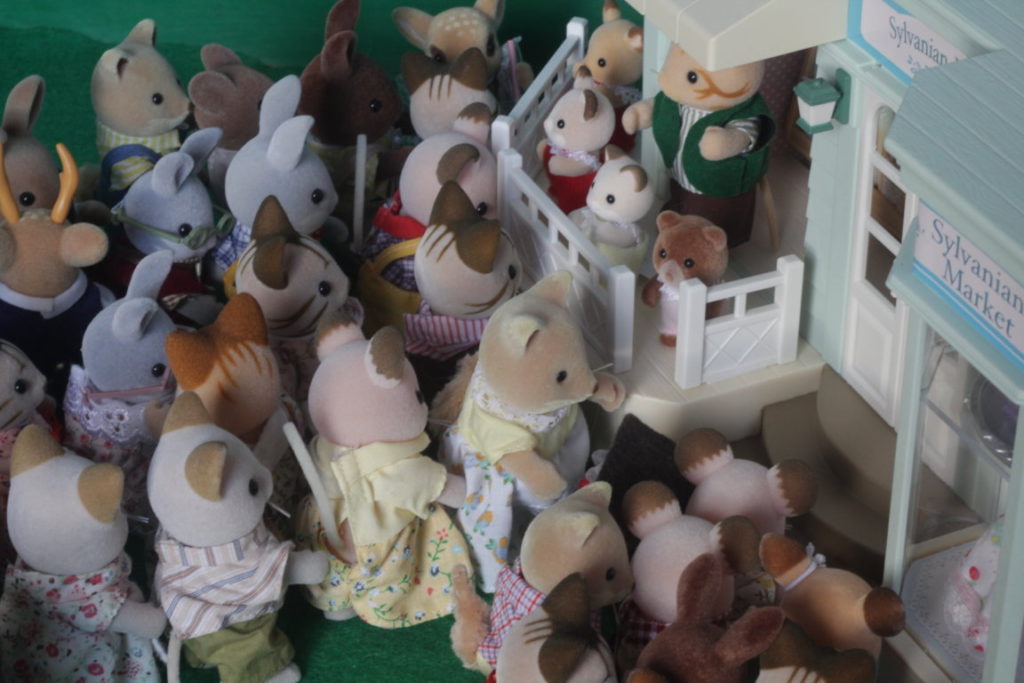 “Mayor Elliot, Sir, do my sister and I count as children or as adults?” Lupin Macavity asked from where he had lined up in front of Oscar Buckley. He wasn’t too sure because he and his twin sister Clara were seventeen and almost of adult age.

“You may count as adults, you and Clara are both hardworking and mature and will do a splendid job in this project, I know.” he replied.

Clara and Lupin both glowed with pleasure as they heard the Mayors words. It was a lovely to hear that the Mayor thought so highly of them.

“SNAP” went Cameron’s camera, “Come on Rowena, we have an article to write!”

Hello everyone! I am very happy to say that this post is finally getting published though the photos are not my best work, they are a tad cold looking and plain in my opinion. Thankfully, my next photos have turned out very well and I am really excited to publish them, they are a lot warmer and clearer and I love them! I am aiming to publish the next bit of the story soon, maybe in a week or so? I don’t really know. Thanks to school, I feel quite drained of energy. Luckily, only two tests, two project hand ins and one more week of school to go. This term has just dragged on!

I hope that all of you have had a good week,