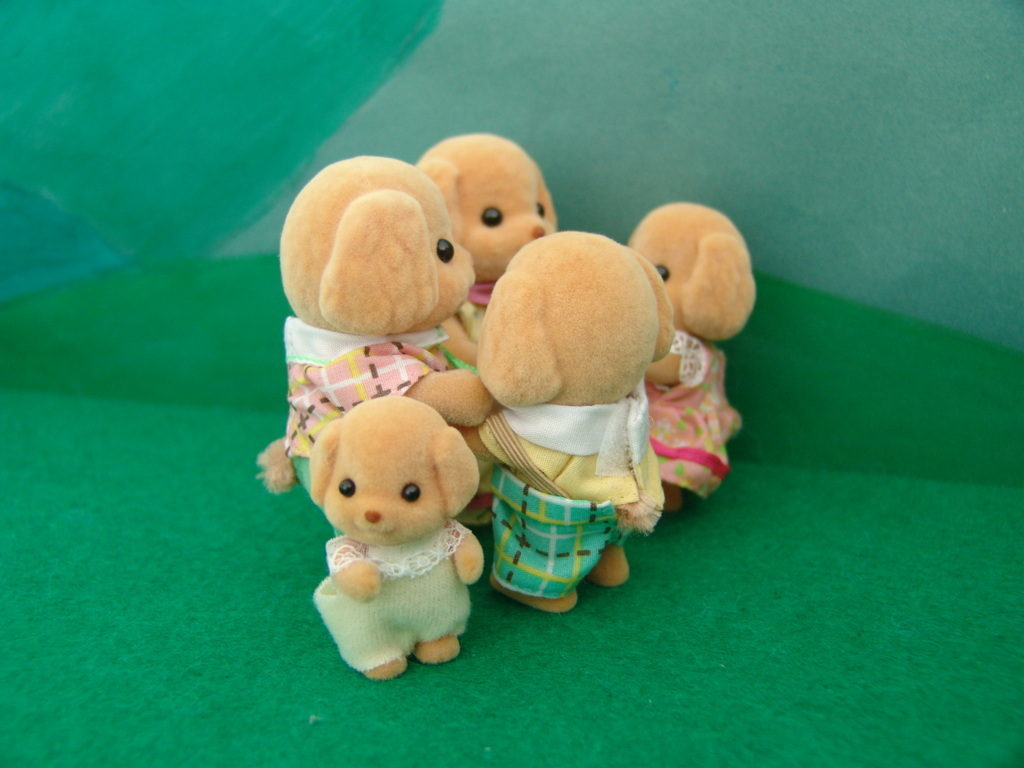 It was another cloudy morning in Dandelion Creek, a week had past since the Cakebread family had arrived. Enjoying the mild temperature, they decided to take a walk around the village which was quieter than usual.

“Children, we have decided that tomorrow, you will start school again!” Martin Cakebread said to his family.

“But Father! We only arrived recently! Please don’t make us go to school quite yet!” pleaded Melinda,

“Please Father!” her brother Marley chipped in, he certainly was enjoying sleeping in late.

But Martin and Melissa remained firm, their children would go to school tomorrow.

So, rather reluctantly, Marley and Melinda got up at six in the morning the following day, envying their younger brother Milo who was still sleeping even after they had changed and made their beds. Breakfast was not that cheerful that morning as both school children were still half asleep. Mother Melissa prepared their lunches this once and even added a special treat! At seven, Milo was also awake as the children had just finished putting everything into their new bags.

“Good bye! Have a great day!” their parents called after them, ” Don’t forget to take the left path when you reach the big oak tree!” 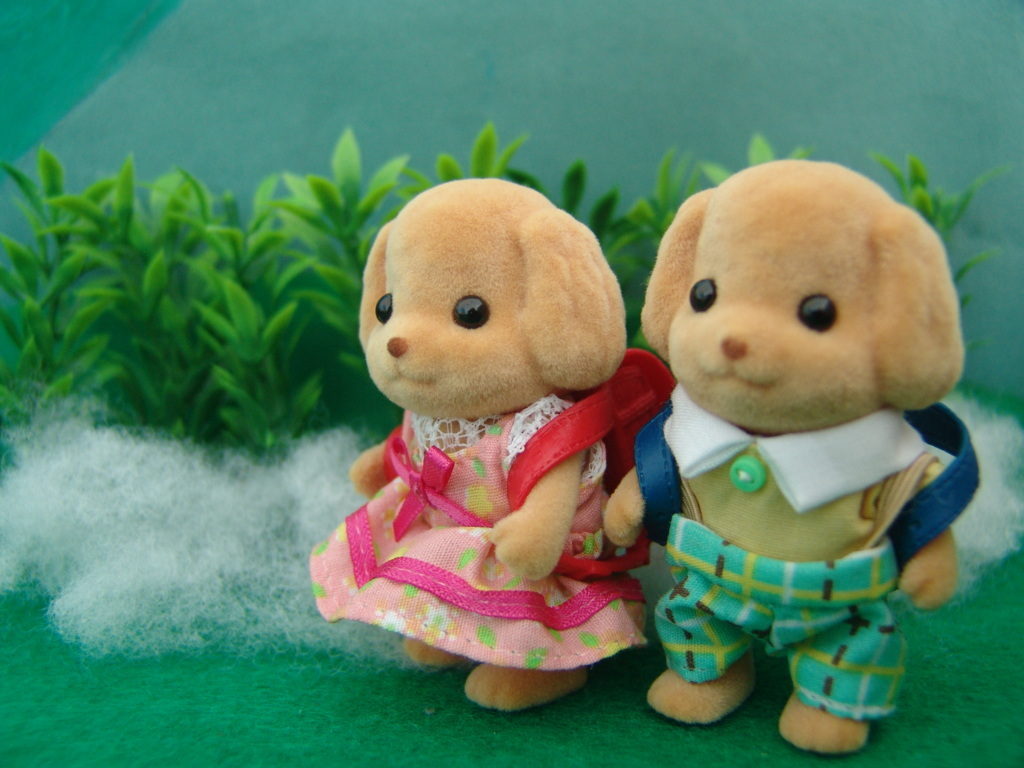 “Why does the weather have to be cloudy?” Marley moaned, “Why couldn’t it be cloudy another day when we don’t have to be outside?”

“You say that all the time” Melinda sighed, glancing at the streaks of snow in the landscape “I do hope it does clear up a bit so that the snow can melt and spring will come!”

“Yes yes, but you will have to wait a while since it looks like more snow is going to fall any minute!”

Melinda opened her mouth, ready to say that the clouds were no where near dark enough for it to able to snow when she was interrupted by sounds of voices in the distance. 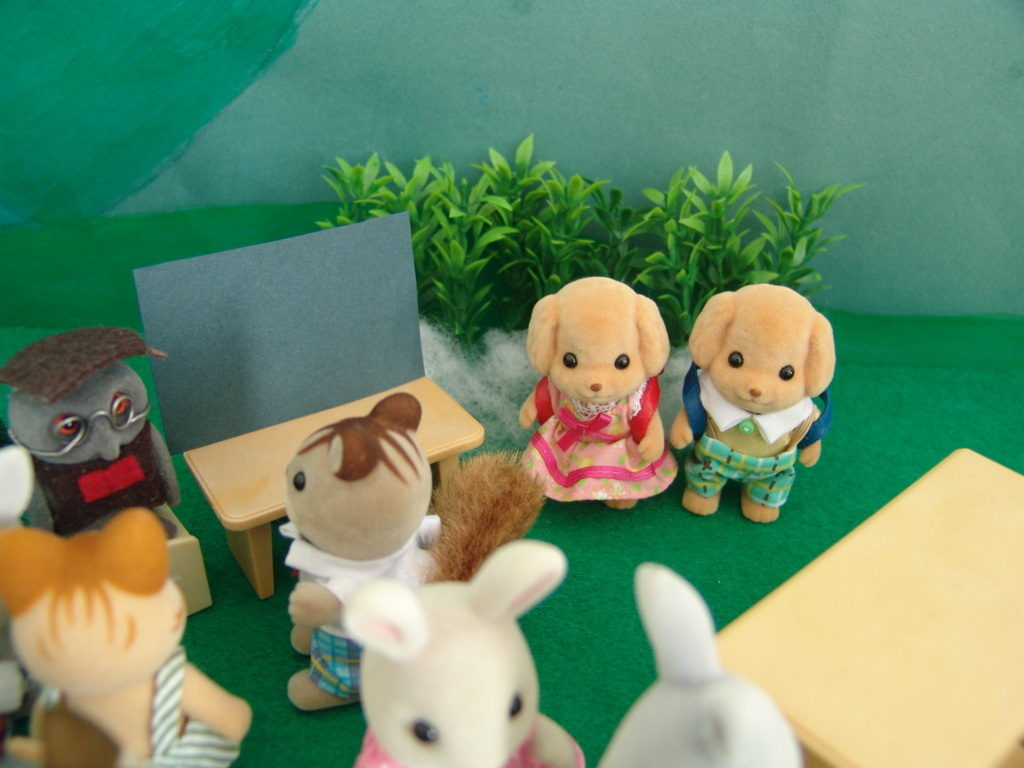 Yes, they had reached the school. It was not really a school, just a clearing with desks, chairs and a blackboard. Students were busily chatting in groups while an owl stood on a stool. 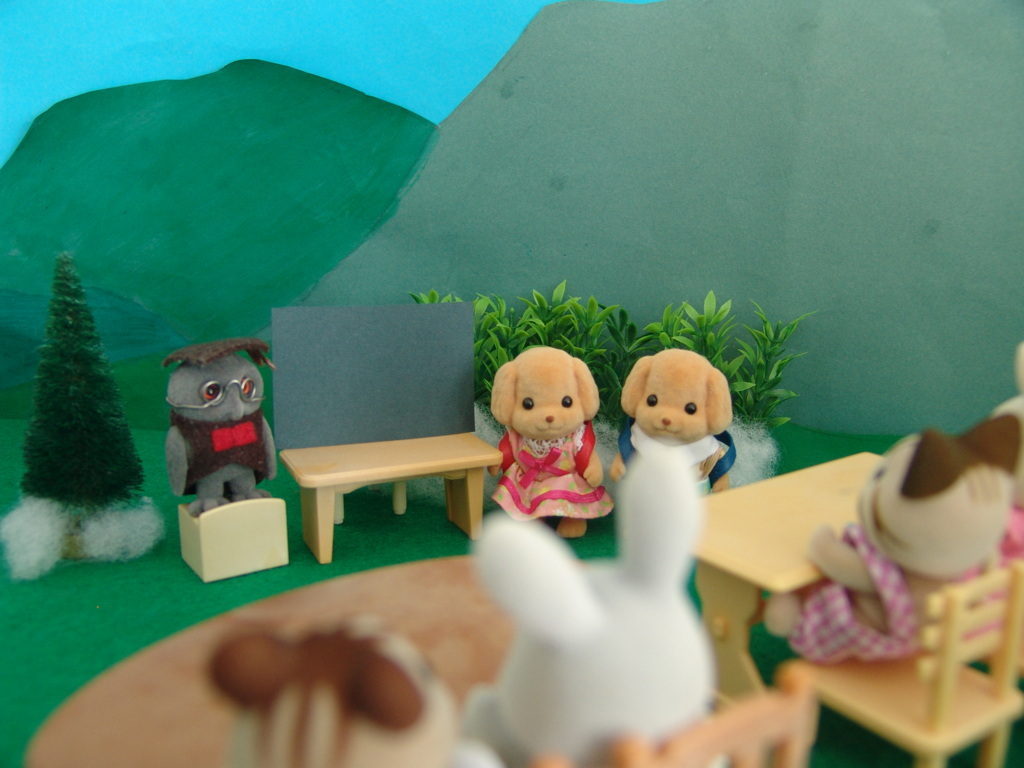 Ring-ring-ring! Went the hand bell and all of the students went to sit in their seats. Melinda and Marley just stood there, waiting.

“My name is Aristotle Treefellow and you must be the Cakebread children if i am not mistaken, class, welcome Marley and Melinda!” the owl hooted.

“Who will be kind enough to sit next to Melinda?” he asked and a rabbit promptly raised her hand. “Thank you Rosie, you will be Melinda’s sitting buddy for the week. Rumpus, sit at the back of the class at the spare desk please. Marley, sit next to Rumpus.” 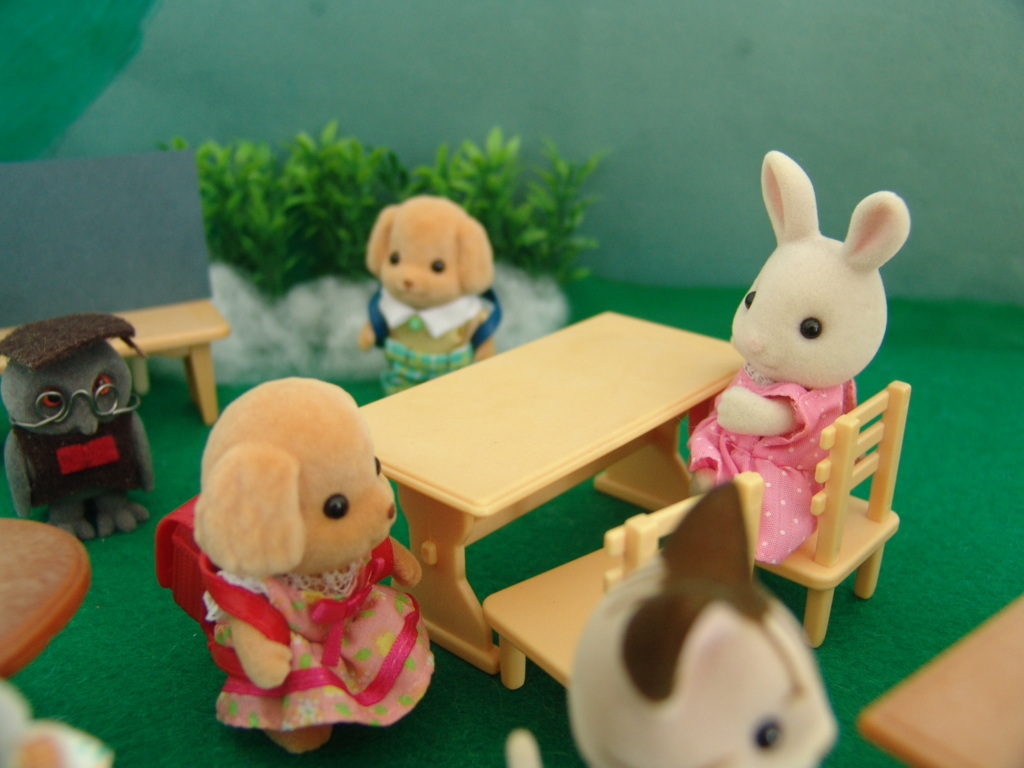 Melinda eagerly walked over to the girl, they had briefly met a few days ago but hardly knew each other. Nervously she sat down, Rosie watching her every move.

“Hello Melinda! How are you? Are you nervous for your first day at school here? Aristotle may look a bit intimidating with his glasses and all but really he is quite nice, just don’t mention that you don’t like to read or anything, he will be really angry!” Rosie explained. 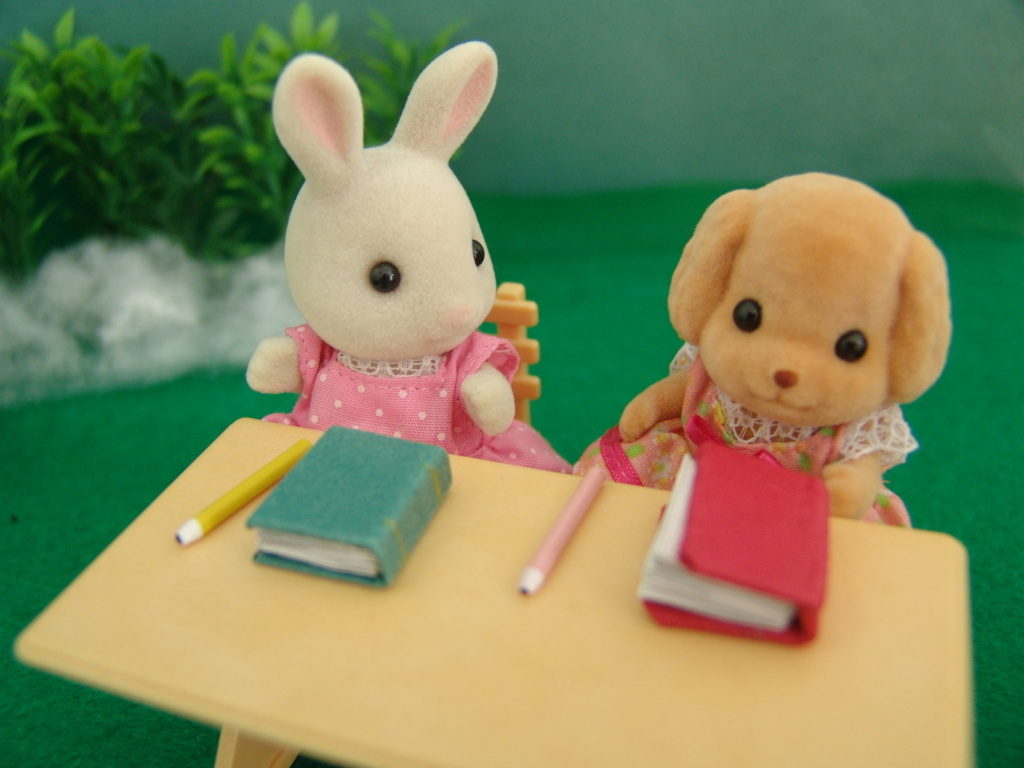 “History first, get out your books please. What did we learn about yesterday Rosie?” Aristotle asked.

“We learned about the first Sylvanian community in the Sylvanian Woods sir.” she replied.

“Umm” spluttered Melinda, she hated when she was put on the spot like this.” The Timbertops, umm, Evergreens and Dappledawns?”

“No, not quite. The Dappledawns arrived much later. The one you want to say is Wildwoods.” Aristotle corrected 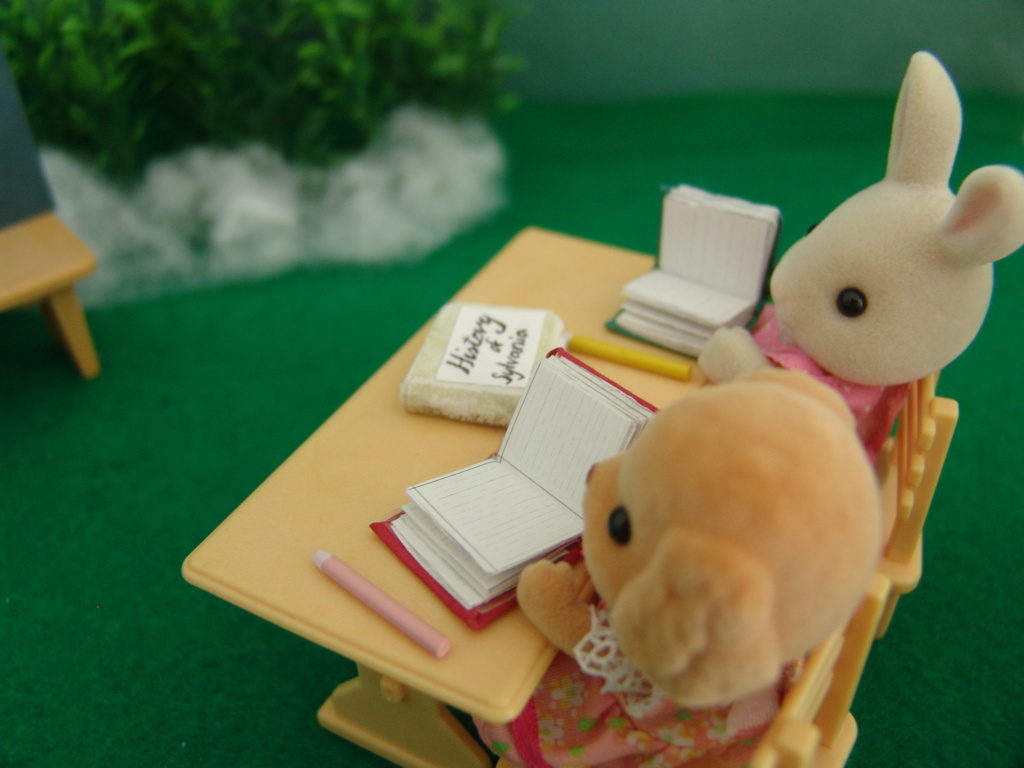 While Aristotle was busily asking questions about the first community, Melinda was searching and searching her bag for her History book. Rosie guessed what the problem was and kindly pushed her copy between them, saving Melinda from confessing she had forgotten her book. (Aristotle could not tolerate it when students forgot books.) 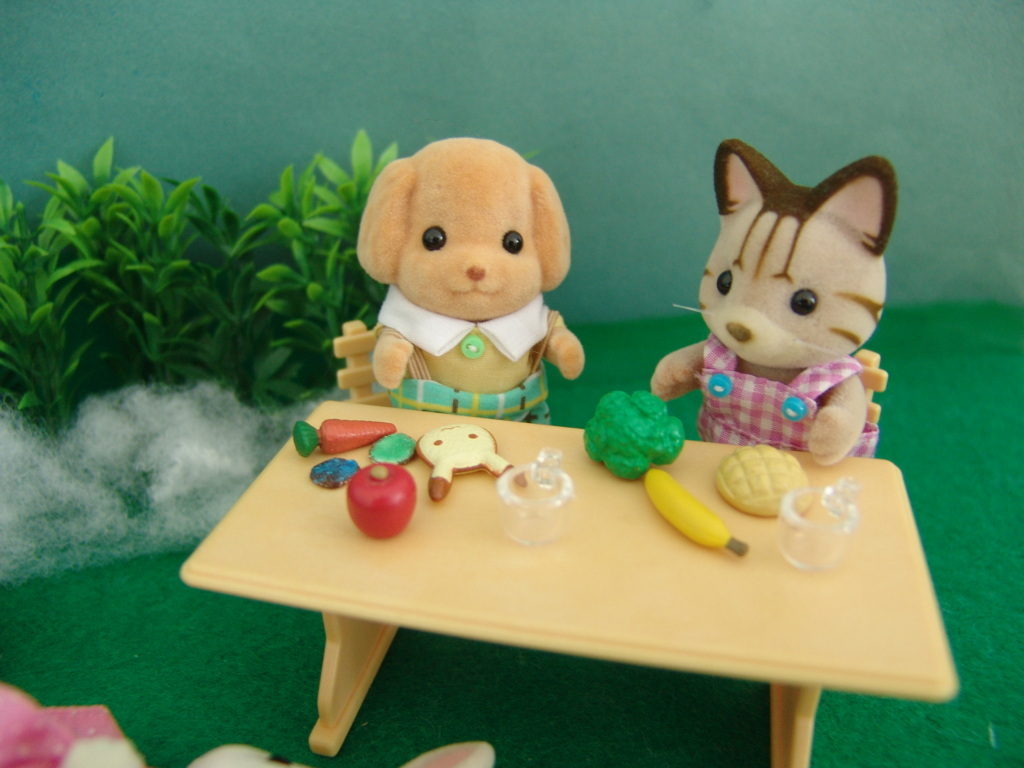 Lunchtime soon came around and Rumpus was greedily eyeing the biscuits that Melissa had packed for her son. “Hello, I am Rumpus Macavity and my sister Asparagus the vegetable sits over there” he said, pointing to a girl in a red and white dress.

“Rumpus! Stop being so mean!” Rosie exclaimed who then slipped and fell right onto her back.

“What a pity! That was meant to be for the Queen of Vegetables, highness Asparagus from Wishy-washy Dish washing land.” Rumpus explained. 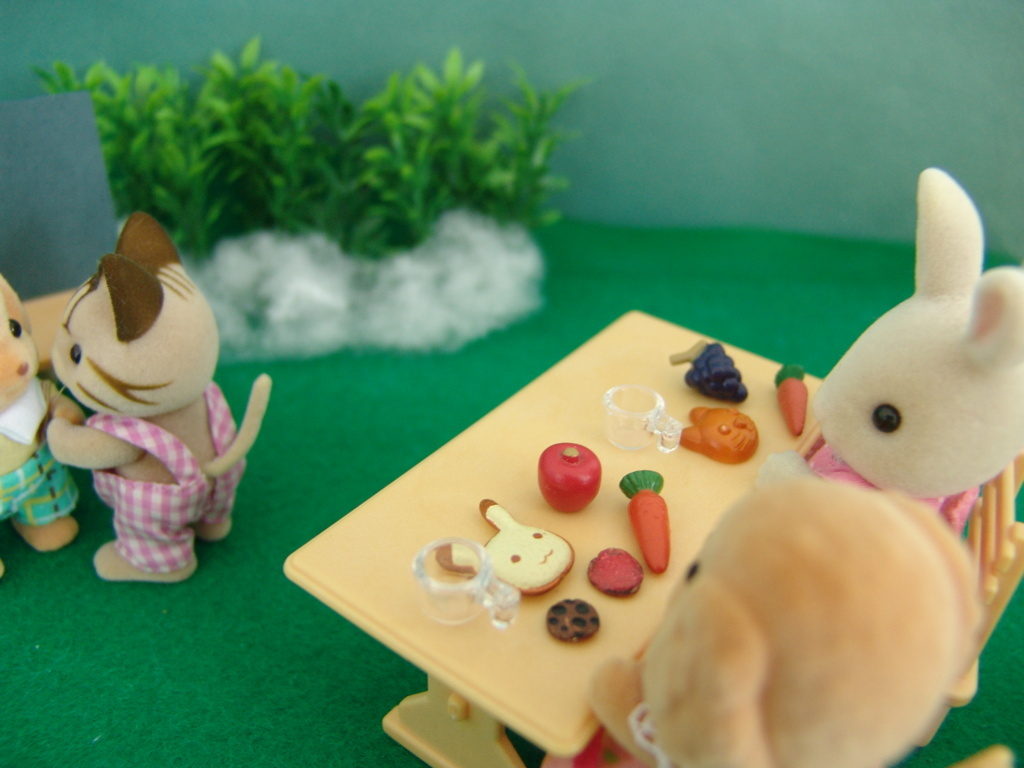 “You can have one! Thank you for letting me use your history book” Melinda said, handing Rosie the pink biscuit. 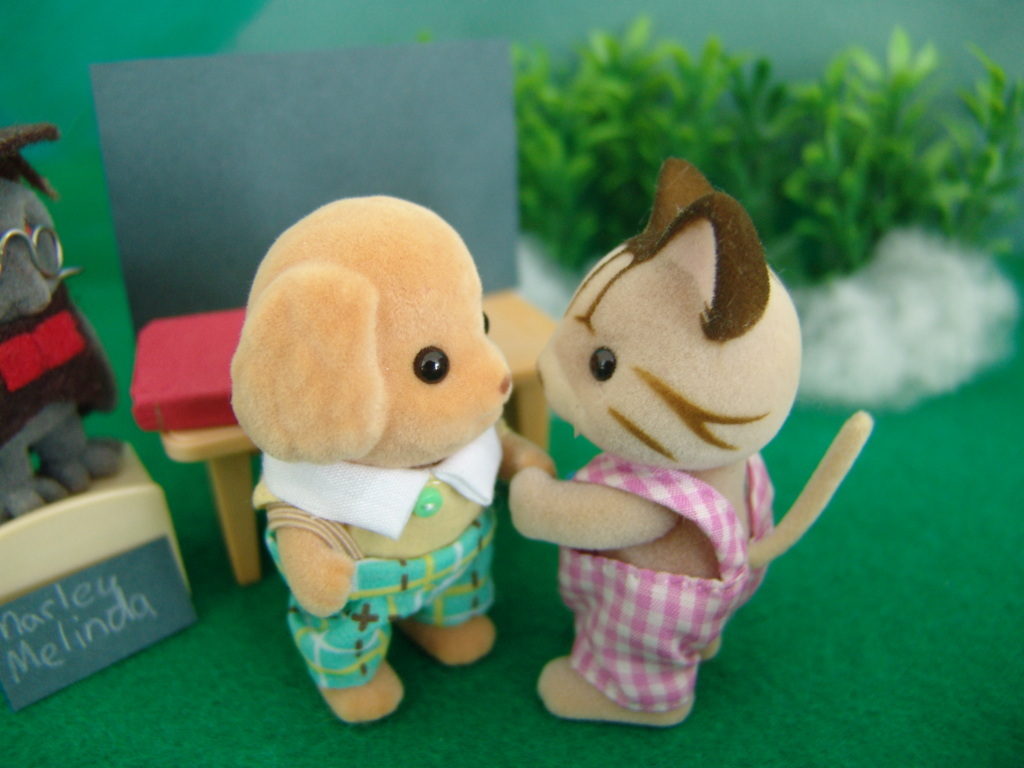 After a while lot of lessons including English, Science and Maths, Rumpus and Marley finally had time to perfect their handshake which they had been practicing at lunch. Maybe school was not going to be that bad…

Managed to write a story at last! It was supposed to be longer but I stopped taking photos one day and the next few were rainy and cloudy so this will have to do.