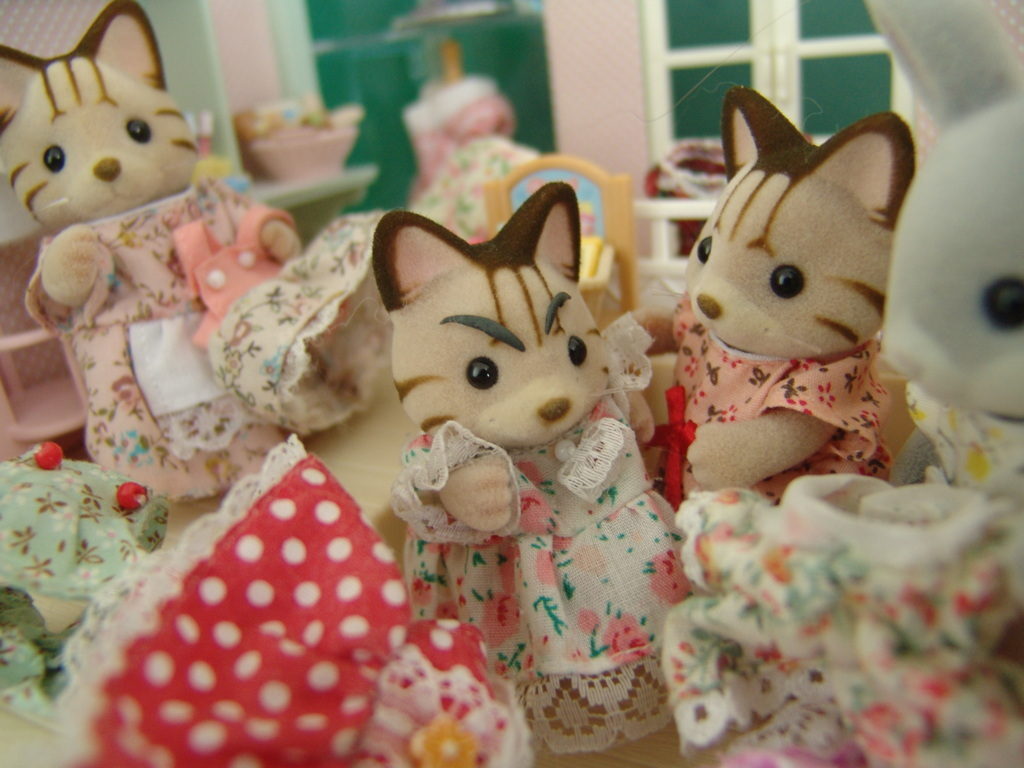 It was a Saturday in Dandelion Creek, the snow had melted and turned into water, the sun hid behind the clouds. Everyone was inside their houses, making lists for the annual Sping Cleaning next weekend. In the Country Market however,things were not so peaceful. Mother Caroline and Older sister Clara Macavity had taken Asparagus (the second eldest daughter) to get a new dress.

“No! I don’t like it! It is far to frilly! I look like the doll Aunty Margarete had ontop of her Christmas tree a few years ago.” Asparagus argued, tugging at the lacey dress.

“No, you look lovely!” Clara commented, smothening the lace ” You are a proper young lady now!”

“But I don’t want to wear this!” she complined.

“What about this one?” Caroline asked, holding out a pink dress.

“Mother! You know I hate pink! Anyway, that style of dress would make me look seven like that green dress over there!”

Sorrel sighed, Asparagus Macavity was quite difficult when it came to clothes shopping, firstly, she would not try on anything pink unless she was forced too and secondly, she had a very specific taste. Sorrel always dreaded the time when her dresses became too small. She held out a non pink dress for Asparagus to try. 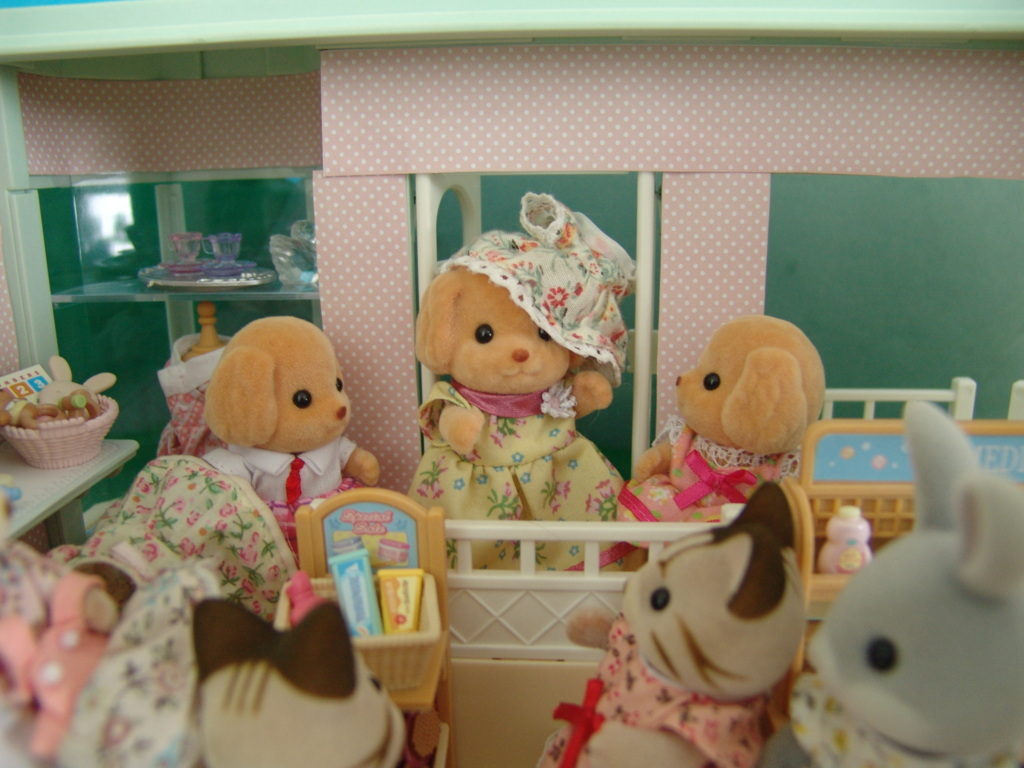 So Asparagus tried that dress on, it was far too small which was a good thing for Asparagus since she didn’t like it anyway but bad for everyone else, who had to struggle to find another dress for her to try. Seeing it was too small, she took it off and threw it behind her- Landing on Mrs. Cakebreads head who inhaled sharply in surprise. Everyone turned around. 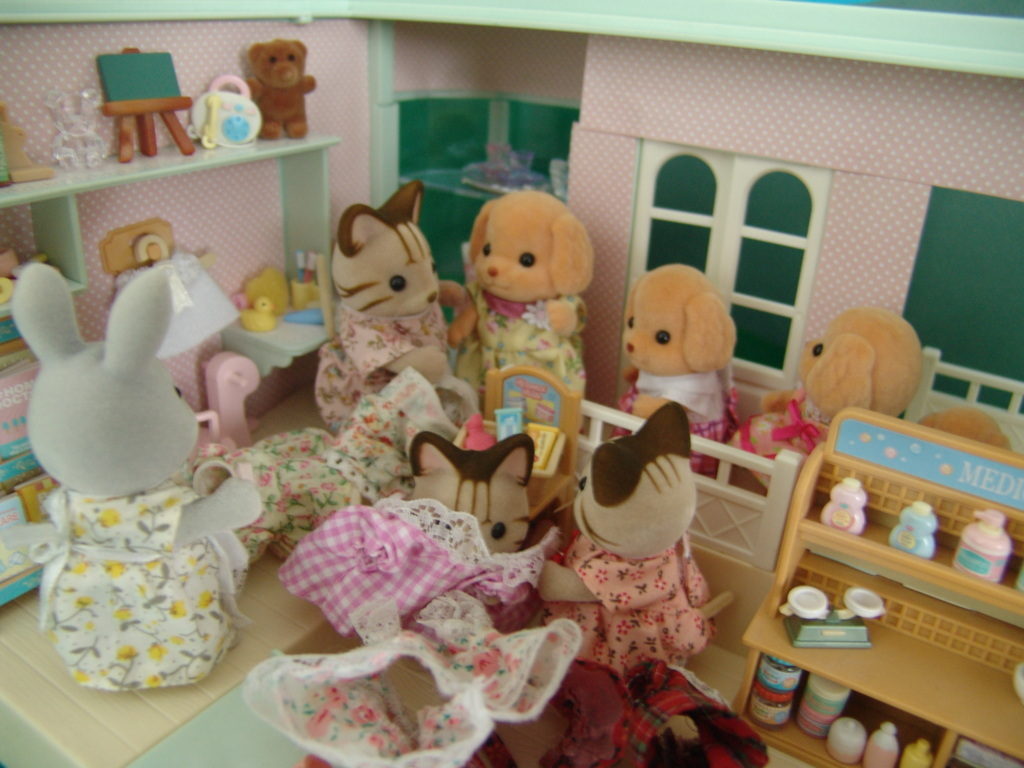 “Oh my goodness! Are you alright? I am so sorry! Asparagus needs a new dress, I didn’t think she would- Oh I am so sorry!” Caroline fretted, taking the dress from her head. Sorrel also came over, worried that she had made a bad impression. Clara was scolding her sister who had pulled on the nearest dress regardless of the colour to spare herself any more embarrassment and to look a bit more, presentable. 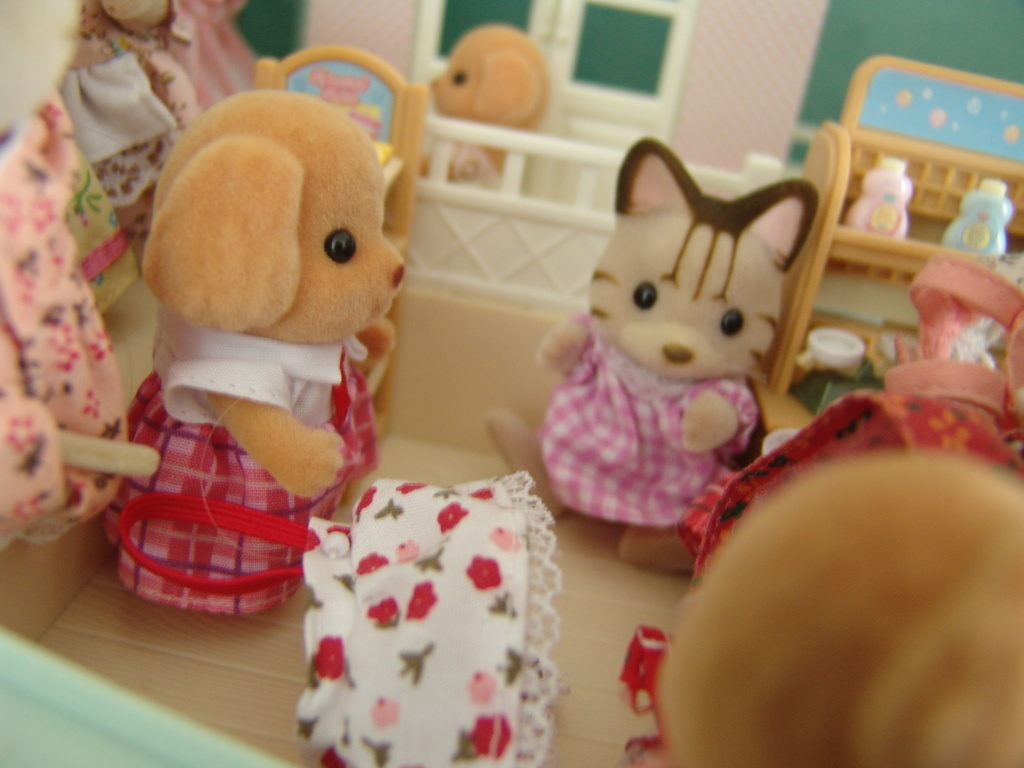 The two girls that had been with Melissa Cakebread quietly walked over to the ashamed Asparagus. Melinda, who now sat next to Asparagus at school, started to pile up the rejected dresses. The other girl, who was dressed smartly in a school uniform (she attended a boarding school, Asparagus found out later), pulled out of the pile a dress, it was Asparaguses old dress. 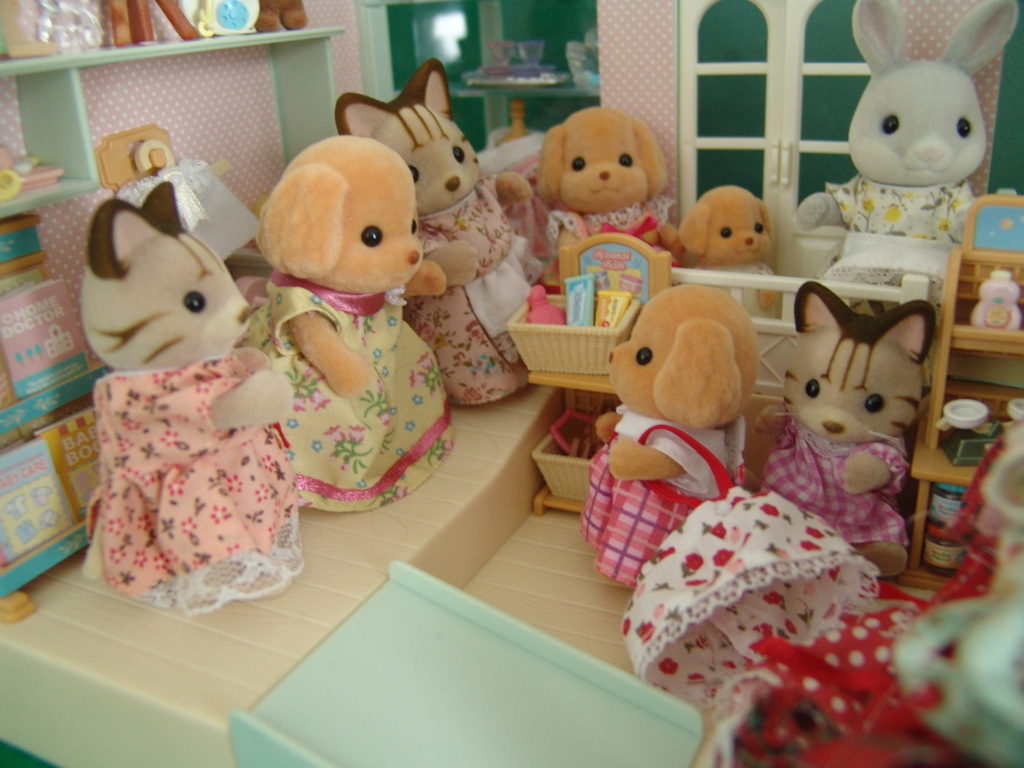 “Mia dear, you have found a dress already?” Melissa asked in surprise, for her, finding the perfect dress to a while (Hours!).

“Yes I have Aunt Melissa!” The girl replied.

Caroline smiled to herself, if this girl toos Asparagues old dress, she would have to pick a new one.

“Go on, try it on” Melissa instructed. 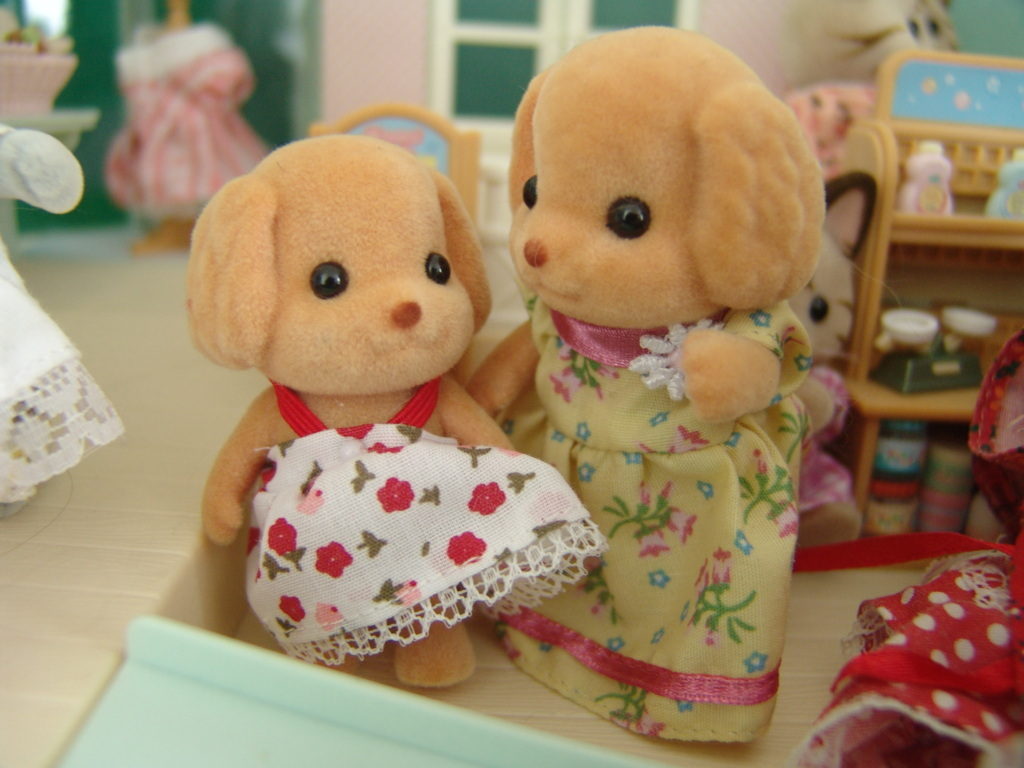 “It is a perfect fit!” Melissa exclaimed.

“I love it! Can we get it Aunt Melissa?” 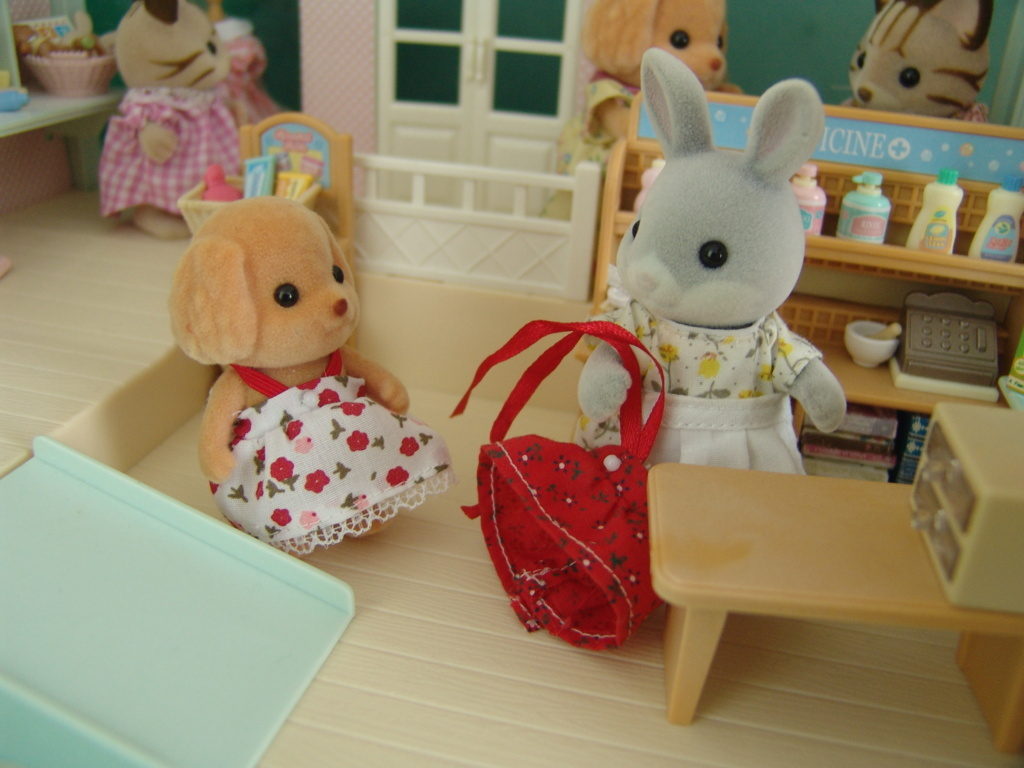 “Oh darling!” Melissa exclaimed, seeing what her youngest, Milo was up to. (He was pulling all of the magazines off the rach and throwing them on the ground)

Asparagus headed for the door, wanting to follow Melinda who was heading off for her violin lessons. Sorrel Cottontail was putting the dresses away when Mia, the new girl, stopped her.

“Sure, here” Sorrel replied, handing her a bright red dress with dark green and blue flowers. 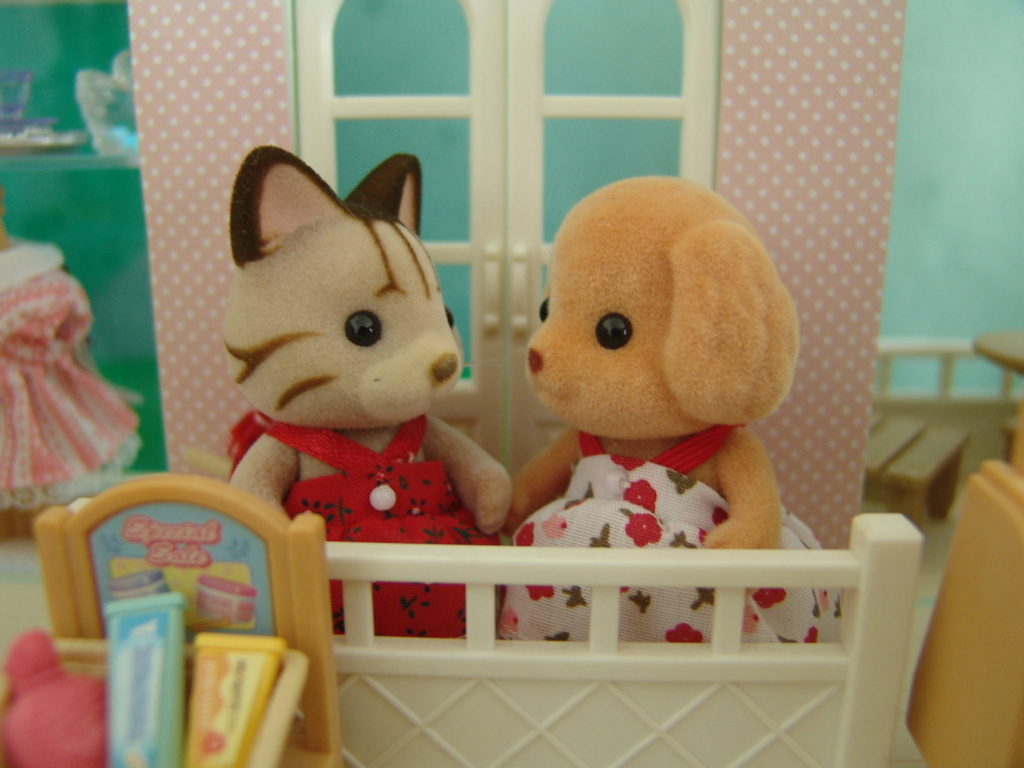 So she did. The dress was perfect, not so girly, practical, yet pretty. Even though they had just met, from that moment on, Mia and Asparagus became friends.

I rewallpapered the Country Market yesterday since the blu tack I used was begining to show since the wallpaper colour was so light. So I re did it but with double sided tape.

I got the cake decorating set and wanted Mia to have a different dress (You can see the original one in the display case) but the only dress she more or less suited, was Asparagus Macavities one so she had to get a new dress. I thing asparagus looks a lot better in this dress than she did in her old one.

I have finally figured out why some of my photos are blurry on my new camera so after this post (These photos were taken on the old setting) you can hopefully see better photos. I took at least three of each photo scene and picked the best ones.

Ah, the cake that came with the set, is in the Bakery.