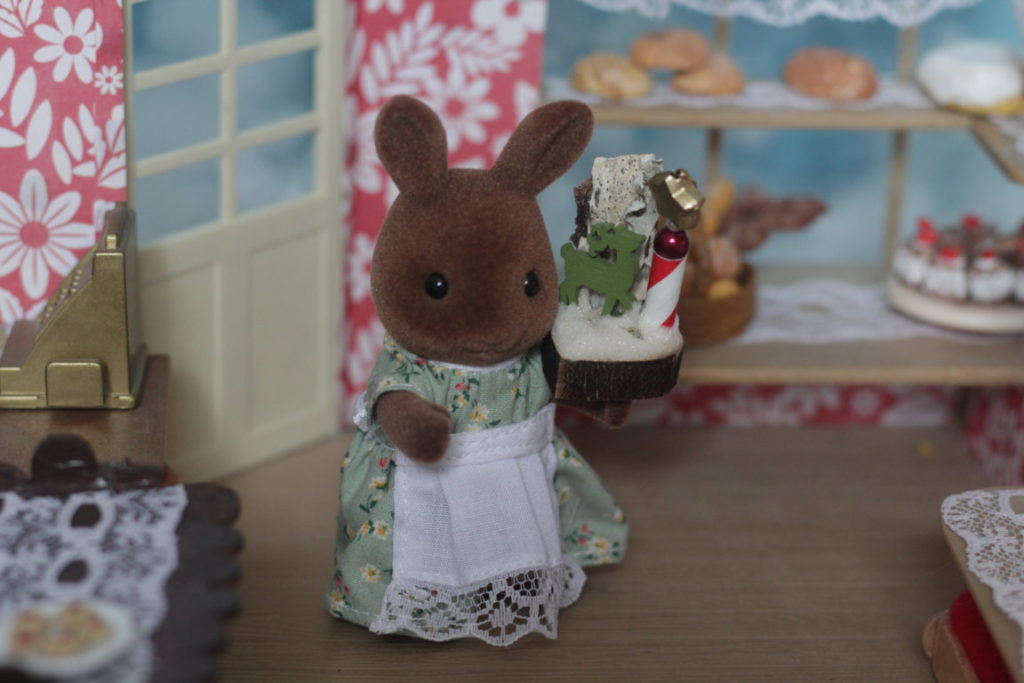 “Where did you get this?” asked Ginger Wildwood. She was holding up a very pretty winter ornament which she had found on the table in the Bakery. The Wildwood family, made up of Herb and Ginger Wildwood and their two children Rusty and Hollie, had moved to Dandelion Creek a bit over a week ago and had been regularly visiting the Bakery. They had been helping out so that poor Caroline Macavity could have a bit of peace and alone time, something that was very rare to her as she had seven children. 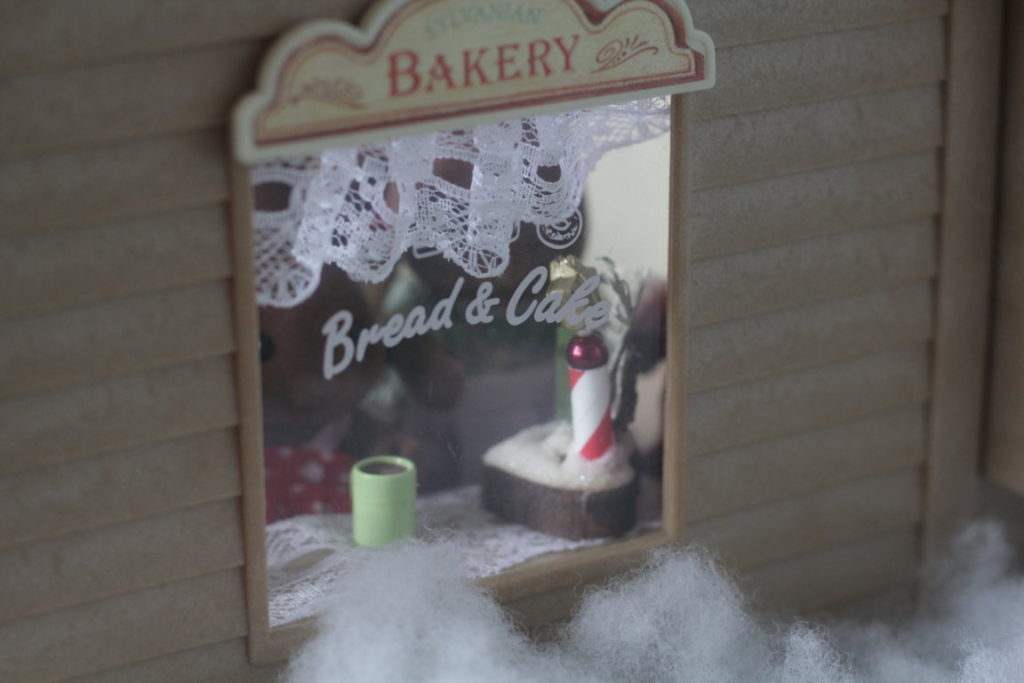 “That was a lovely gift from Riverside, Ginger” Alonzo Macavity answered as he set down two mugs of hot chocolate for the Wildwood children to enjoy. The snow outside was piled high against the window and Alonzo was quite relieved that his wife was not here to tell him to shovel it away. As he looked at the icy snow, Alonzo noticed a figure with brown fur, antlers, wearing blue, green and white hurrying towards his Bakery.

“It is lovely! Do you need any more help?” Ginger inquired, placing the ornament back on the table.

“No, the help with the bread dough was quite enough.” 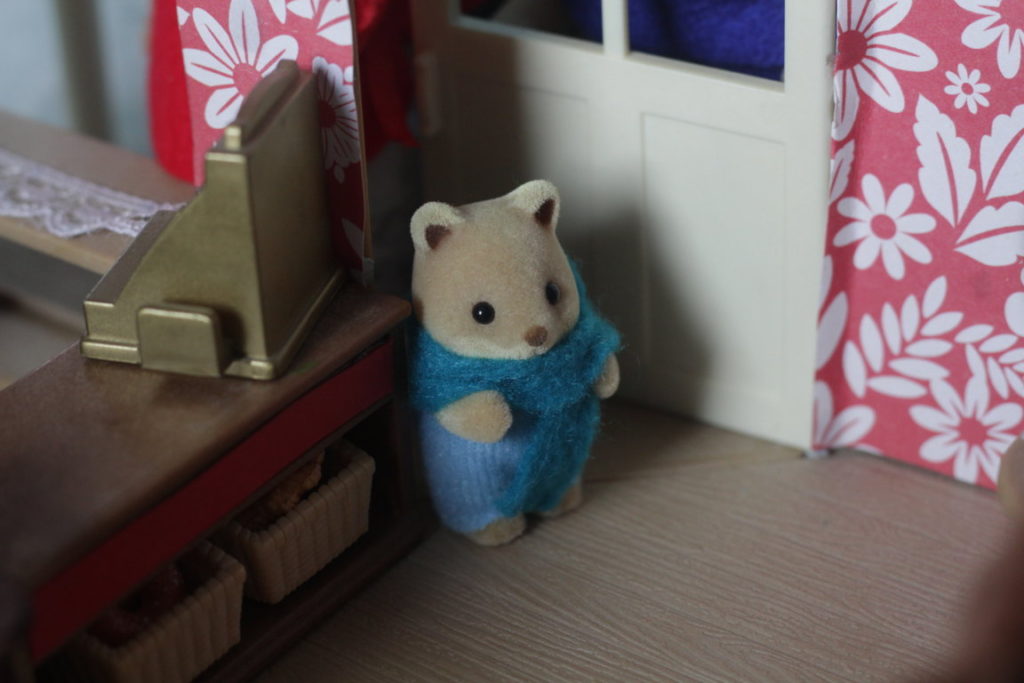 The door to the Bakery opened to reveal a small boy fox wearing a blue scarf. Everybody turned around. 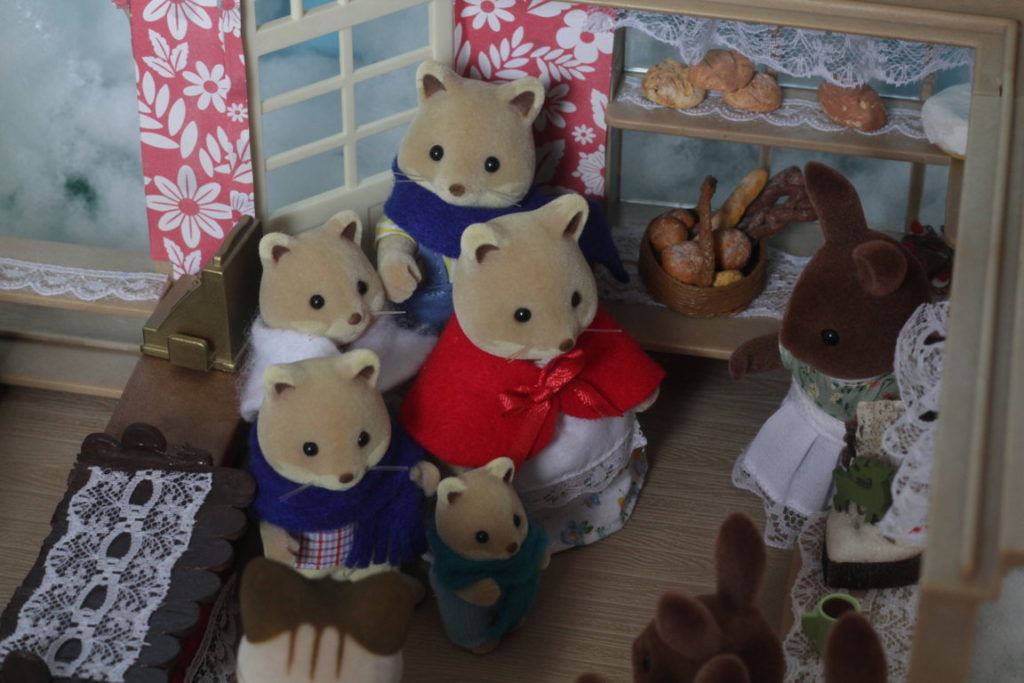 Then, a whole lot more foxes entered. A mother, father, daughter and another son.

“Hello! Am I right in Dandelion Creek here?” asked the father.

“Yes, this is Dandelion Creek’s Bakery” Herb Wildwood responded, “My name is Herb Wildwood, what is your name?” 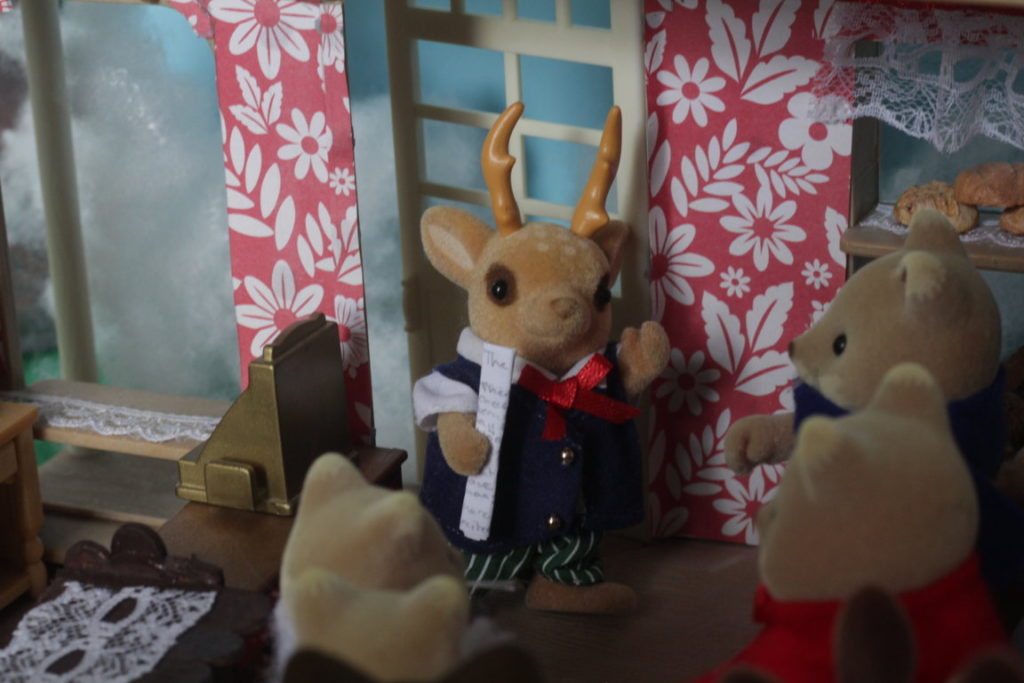 Before the man could utter his name, the door opened again and a very cold Cameron Moss scurried inside. “Alonzo! Alonzo!” he called and waved a rolled up bundle of paper around wildly. He was so excited that he didn’t notice the mass of people who gathered before him. 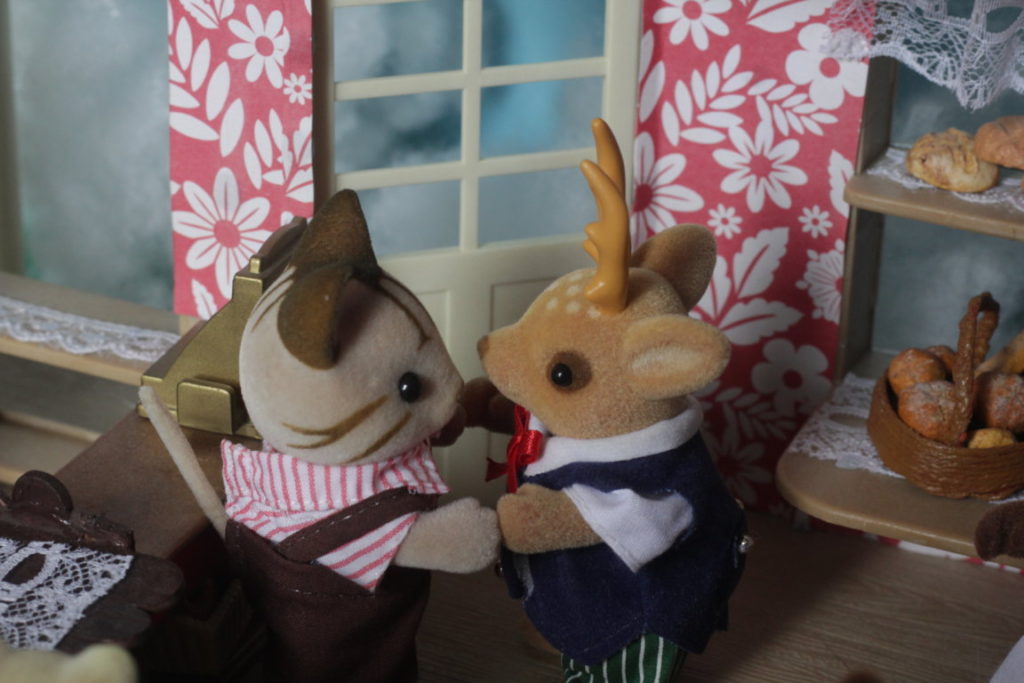 “Cameron!” Alonzo exclaimed and pushed his way through to the man. “Cameron! What on earth are you doing outside without something warm on? Rowena will be so mad!”

“No, no, no. Cameron, you are freezing and I don’t want to imagine what your wife would say if I didn’t warm you up. What you have to tell me can wait.” he said in a very firm tone. Being the father to seven children had certainly made him a master of ‘the firm voice’.

Cameron sighed in defeat and let himself be convinced to drink a cup of tea, then reluctantly tucking the paper he held into the inside of his thin tail coat . 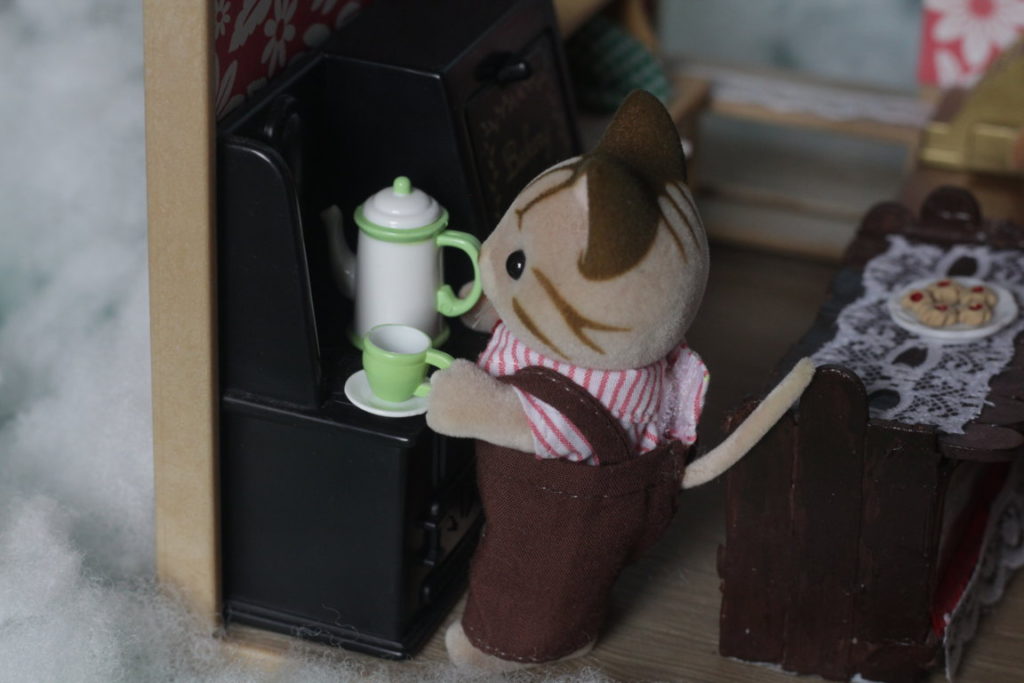 The kettle was set to boil on the stove and Alonzo brought out a teacup and saucer, ready to pour the peppermint tea into. At the same time, the rest of the sylvanians in the Bakery got to know the Slydale family and talked about their reason to move to Dandelion Creek from Pumpkinvilles. 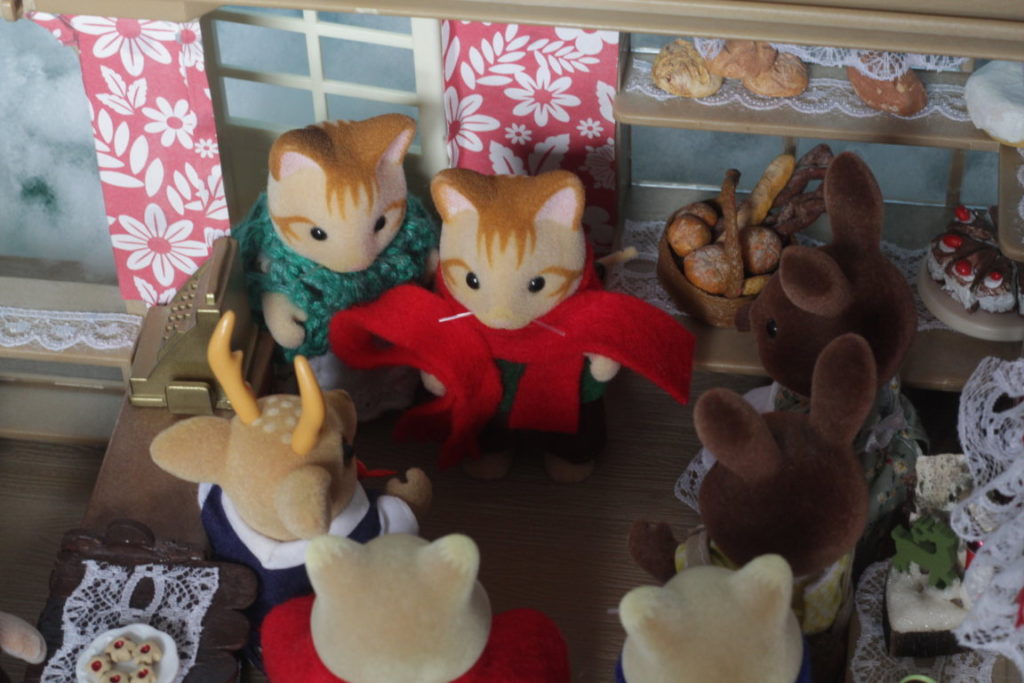 Yet another gust of cold, icy air made the group turn around once again. This time, the Mayor Elliot Beaman and his wife Evangeline were the visitors.

“Cameron” Elliot said “Your wife sent me to give you this.” he handed Cameron a fuzzy red scarf like his own. Cameron promptly groaned at the thought of his wife, who was probably not so pleased that he had run off without putting something warm on. Elliot tossed the scarf to him and then saw the visitors. 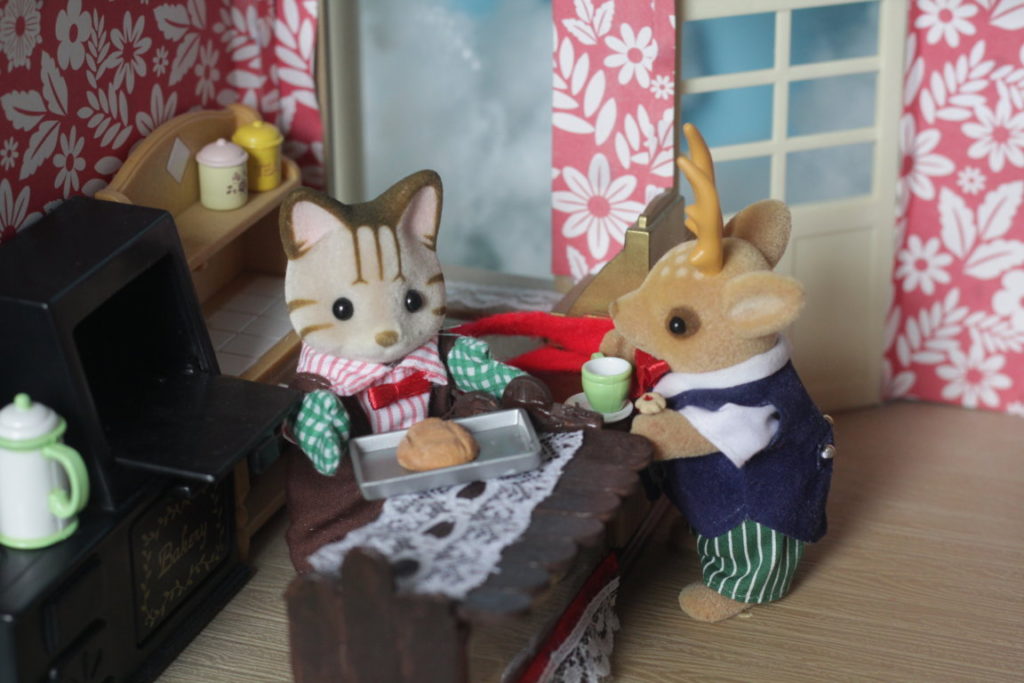 Alonzo handed the tea to Cameron and then took a hot loaf of bread out of the oven. 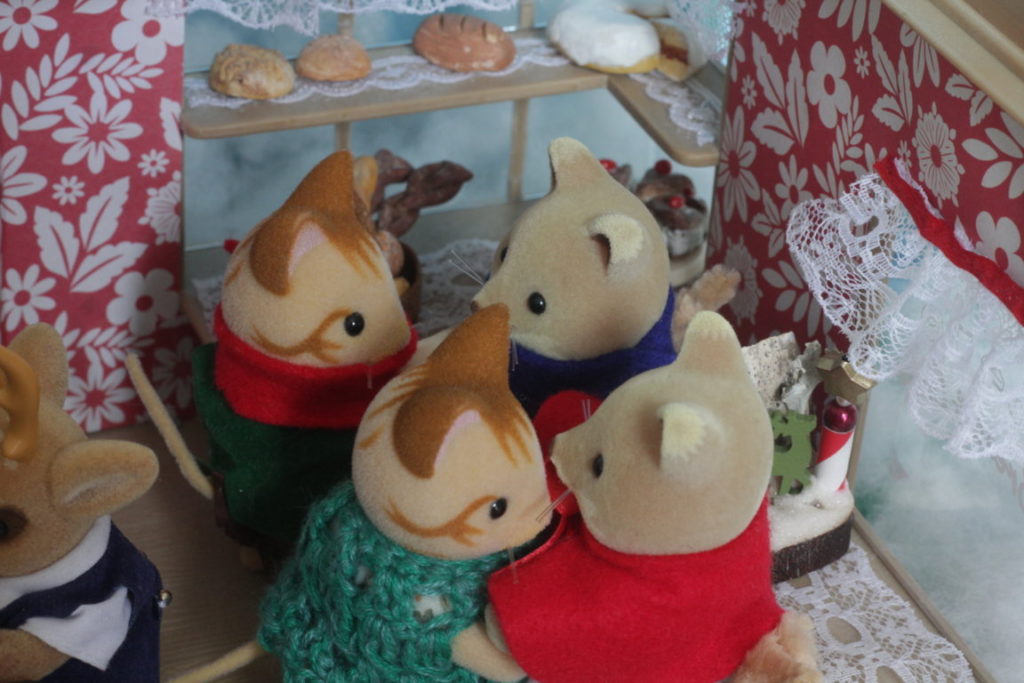 “Hello, and I am Velvette Slydale. Nice to meet you Mr. and Mrs. Beaman.”

“Oh, call us Elliot and Evangeline. I love your red coat, where did you get it?” Evangeline gushed and ran her paw over the fuzzy coat.

“I bought it at in a small shop in Pumpkinvilles.”

“Yes, that is where we lived before. We really didn’t like it there.”

“Our children, Daisy and Buster had a very run down school to go to and Skitter had to go to a very strict nursery. It was awful” Slick explained. 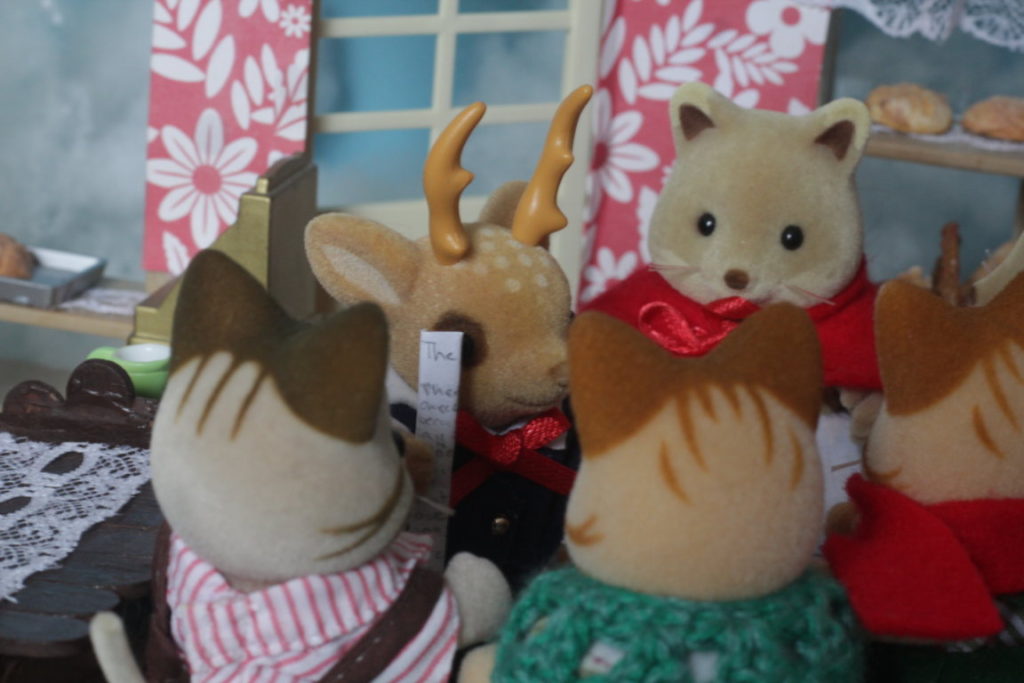 “Now can I show you something?” Cameron asked impatiently after he had finished his tea.

“Well…” he pulled out the rolled up bundle of paper and fidgeted in excitement “I present to you… The Daily Dandelion! Dandelion Creek’s first newspaper!”. With that he unrolled the paper and thrust it into Alonzo’s awaiting hands. 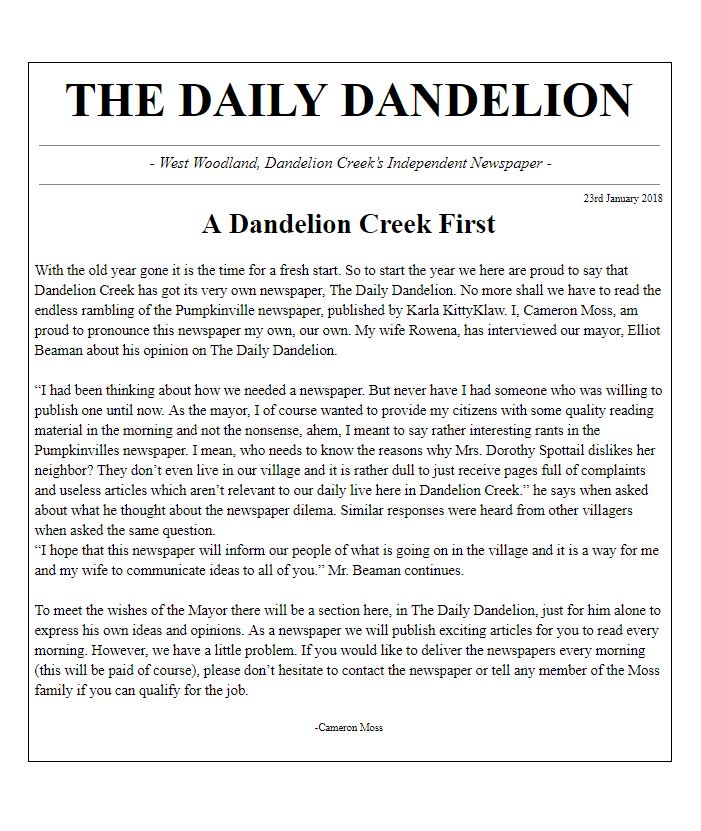 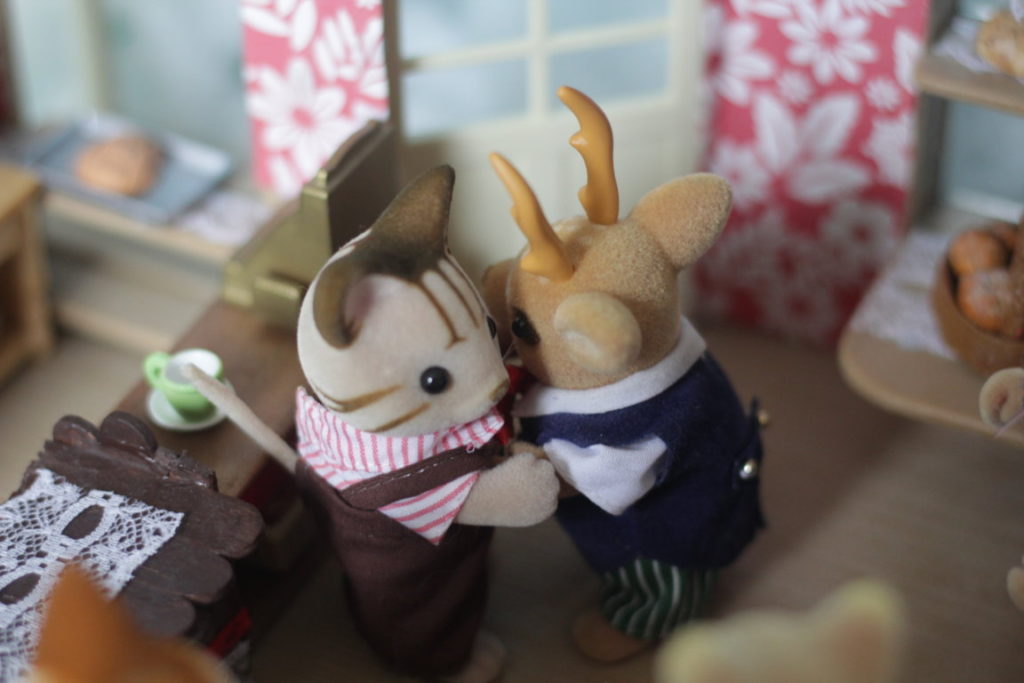 “Wow Cameron! This is amazing!” Alonzo praised and pulled him into a man hug. “This calls for tea for all!” 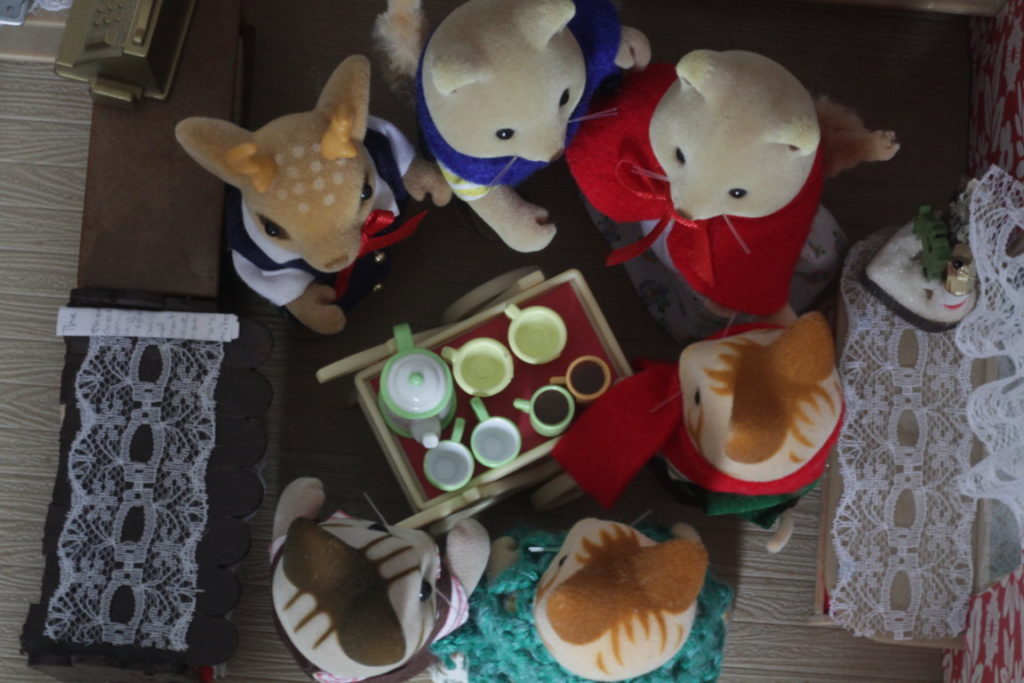 Shortly Alonzo had made two cups of coffee and then a big pot of tea. Everyone was eagerly chatting away about the new newspaper and how wonderful it was to have more critters joining the small village of Dandelion Creek. Suddenly, the door opened and-

“And that is my cue to go.” Cameron announced as he got dragged off by his wife, no doubt to be lectured on the importance of wrapping up warm during the wintertime.

Hello! I know, it has been ages since I last posted but I finally have. Silly me, I had forgotten to publish the second part of the warm winter outfit tutorial which I have lined up and ready to go. The Slydales were a Christmas gift and the Wildwoods I bought around half a year ago. I just haven’t gotten the time to introduce them properly. I have heaps of critters which still need to ‘come’ to the village. 5 families which I bought/received last year! Also, I finally published the newspaper as you could see! The Moss families description is up in the ‘Meet the Critters’ section and the Slydales and Wildwoods should be up soon too!