It was yet another lovely snowy day in the peaceful little village of Dandelion Creek.

“What are you doing, hiding behind the pram?” Mayor Elliot Beaman asked Asparagus and Rumpus Macavity.

“We need to wrap Mother’s Christmas gift and we are seeing when she finally leaves the Bakery” Asparagus explained in a whisper.

The baby twins in the pram, Pickle and Sprout, started to squeal and flap their arms and Mr. Beaman calmed them down. “Hush now Sprout, no need to make a fuss Pickle. We won’t draw attention to ourselves for Asparagus and Rumpus’s sake. They have some very important things to do and you have good to be good little babies.” he spoke softly and gave a warm smile to the two young Macavities beside him. They smiled back as both liked the Mayor very much.

“She is leaving!” Rumpus exclaimed loudly as he saw his Mother walking  out into the snowy landscape in her new red coat. Both children thanked the Mayor for letting them hide behind his pram and then scuttled over to the Bakery door. 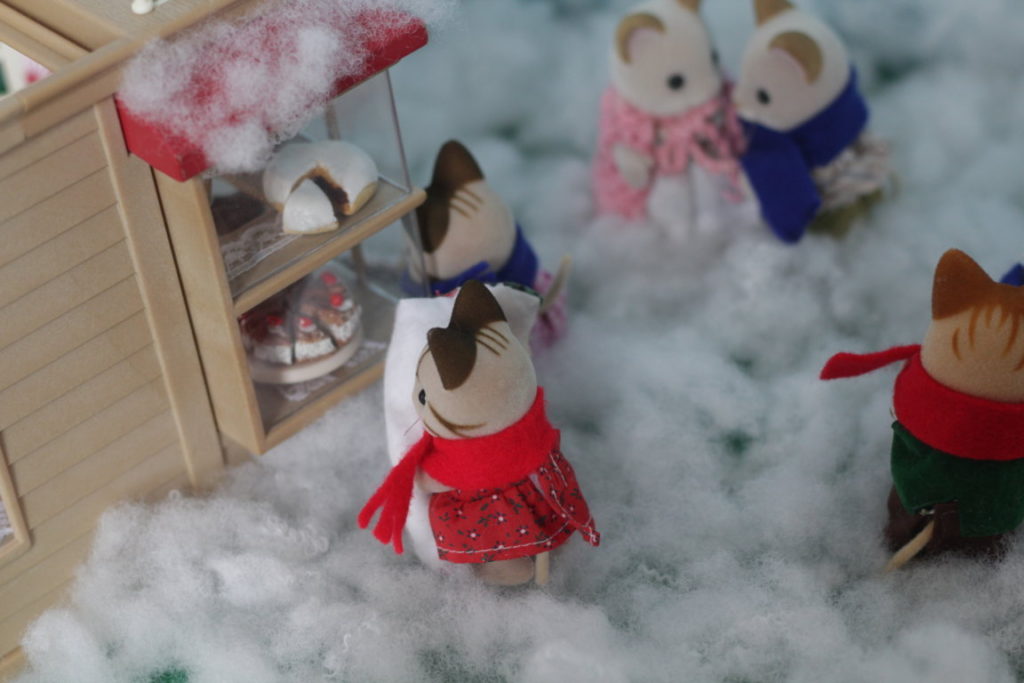 “I am hurrying Asparagus! It is not easily to run through thick snow and carry wrapping paper too!”

“Let’s hope that Mother doesn’t turn around and see us! Imagine if she saw her present!”

“That would be awful! We would have to come up with something new and this thing took ages!” 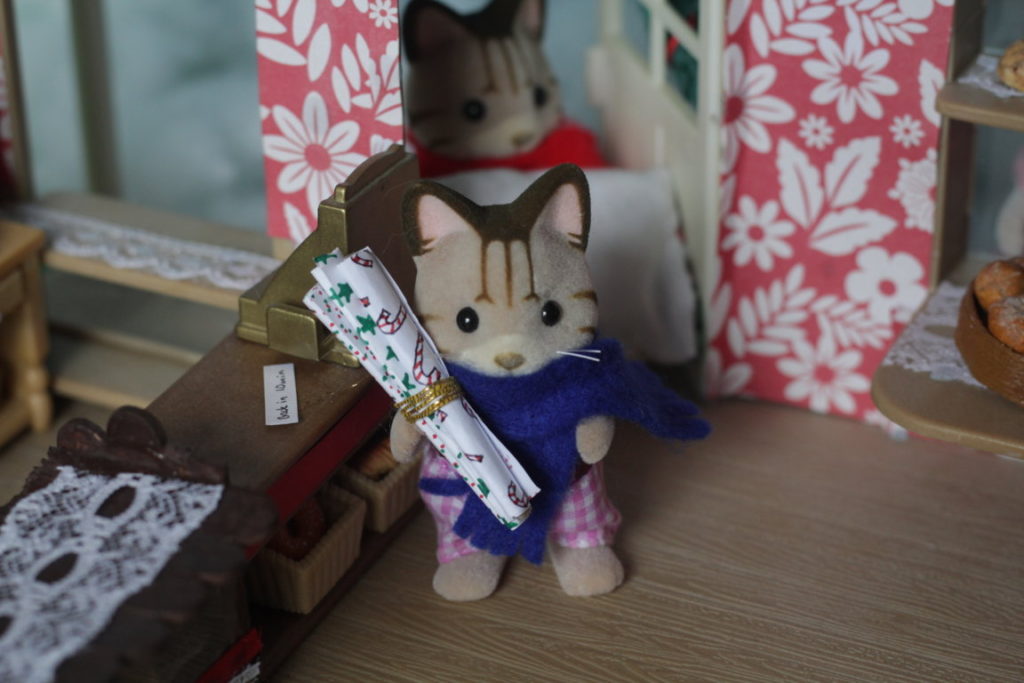 Rumpus reached the door and pulled it open. He was met with a wall of warmth and felt that he had begun to ‘defrost’ at last.

“You could have left the door open for me as well!” exclaimed an irritated Asparagus who had now entered the warm Bakery as well after having to open the door which her brother had just slammed closed in her face.

“I am sorry, princess” Rumpus teased.

“I am not a princess!” hissed Asparagus through gritted teeth as she set the present down on the table “I’d like you to try to open a door when both your hands are freezing cold and you don’t want to get wet the-”

Asparagus just scowled at him and mumbled something which Rumpus couldn’t pick up. 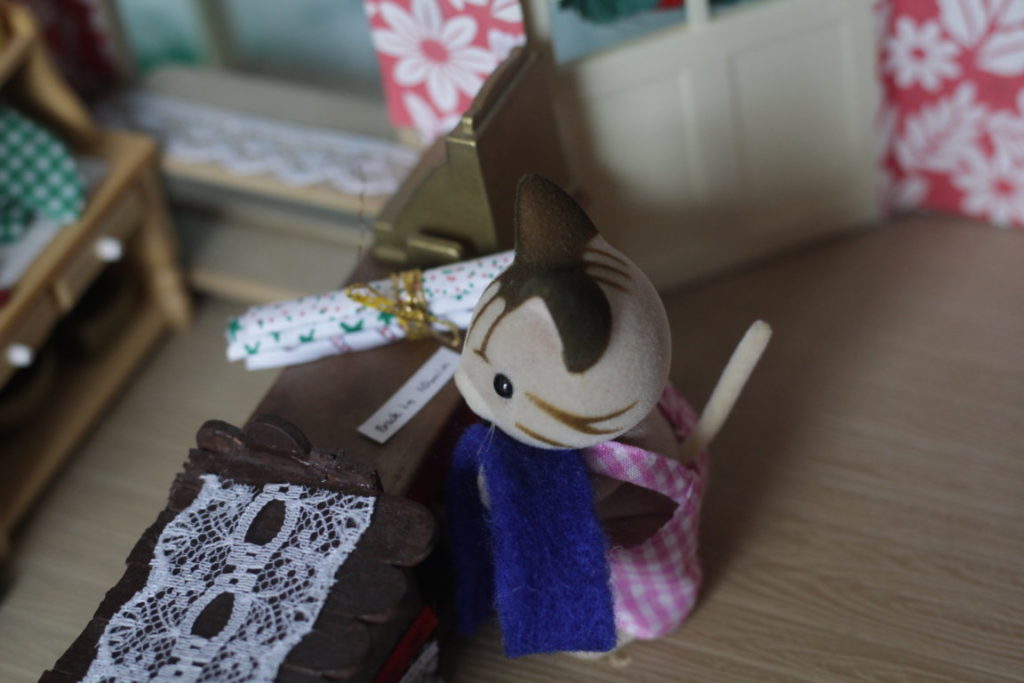 “Mother has left a note!” Rumpus noticed as he set down the wrapping paper.

“Well, what does it say?” his sister asked.

“That she is back in ten minutes.”

“Ten minutes! We have already spent around two minutes bickering and we still need to pack up afterwards! Rumpus! Please could you get me the scissors!” Asparagus flustered. 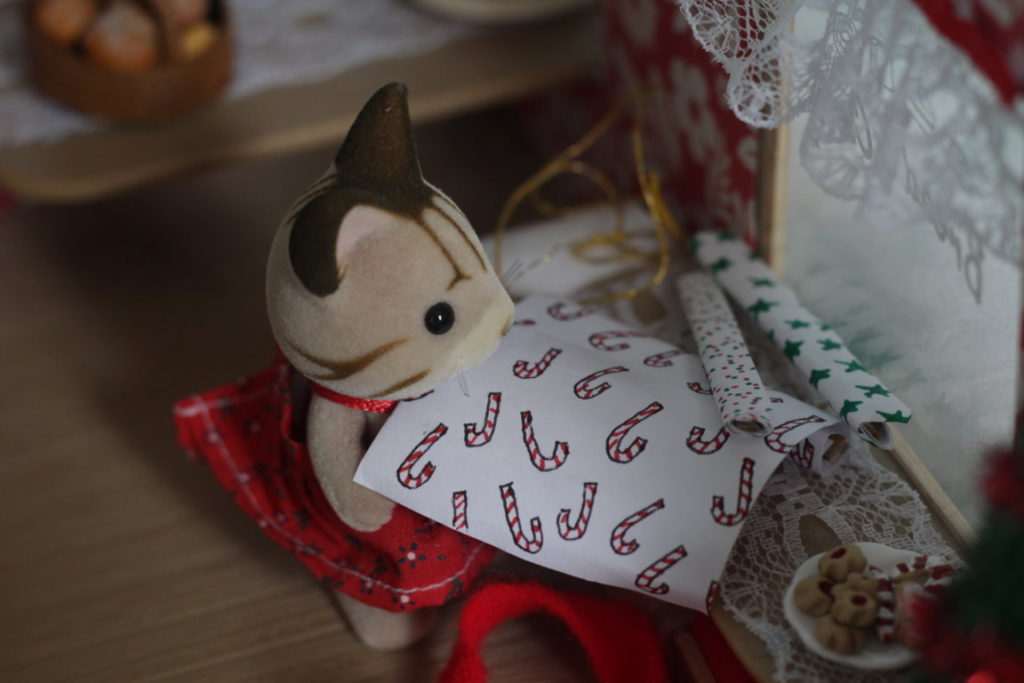 So Asparagus set to work. She first had a look at the different types of wrapping paper that Rumpus had bought at the Country Market earlier. One was with green starts, one with red and green spots and one with candy canes. She was going to pick one with dots but then decided to use the candy cane one instead.

“Where are the scissors?” she thought to herself and finally found them underneath her scarf which she had just thrown on the ground. 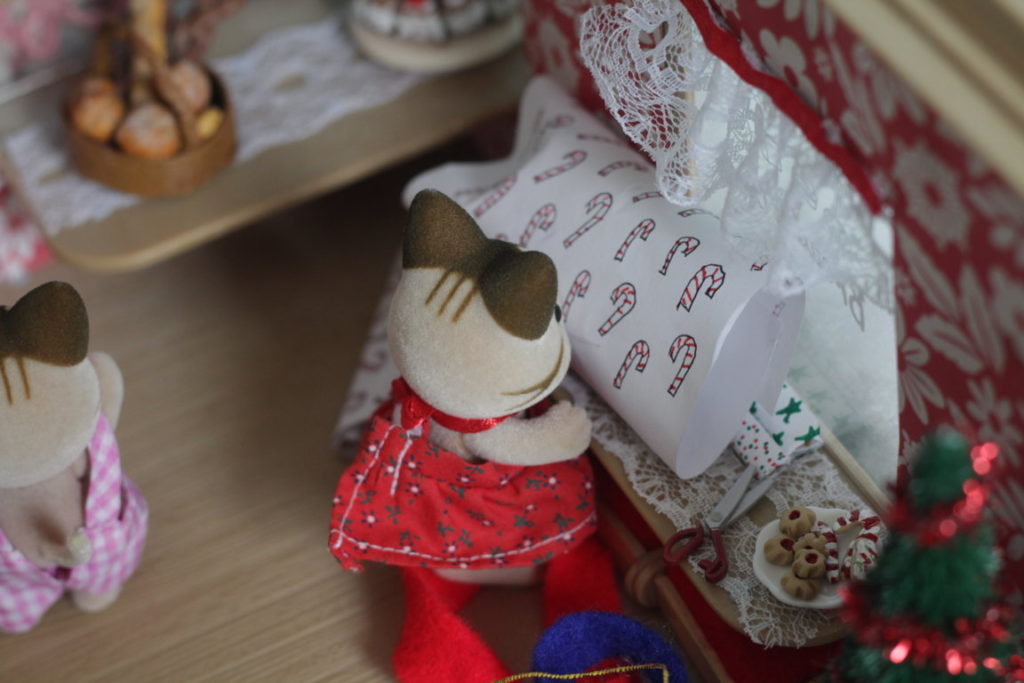 She folded the gift and began to wrap the paper around it. The Christmas cookies beside her were full of temptation but Asparagus knew she didn’t have time to eat them if she wanted to do a good job of wrapping the present.

Oh, had she not left the wrapping to Rumpus. “I should have know he would leave it to the last minute!” she thought “Now I have to rush as Lupin and Clara are not here and Skimble, Electra and Ectcetera are too small to wrap. Why do I have to help my brother out all the time? Why do I have to be so helpful?” Asparagus paused, deep in thought. She seemed to think a lot in the worst situations where time was of the essence. 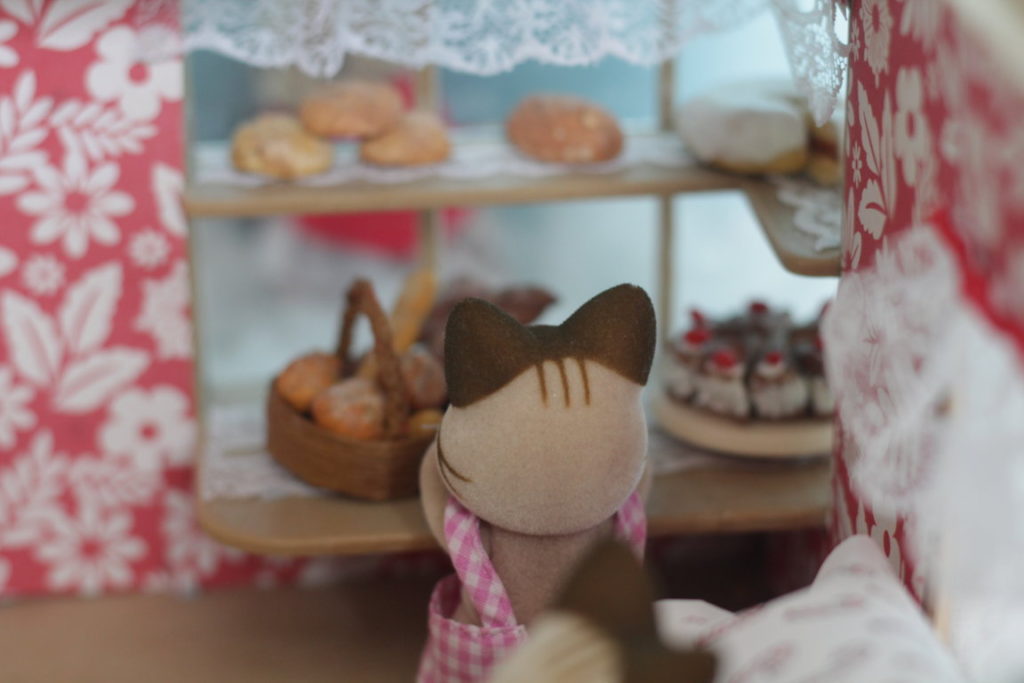 “Hey Vegetable, you might want to be finished that wrapping by now. Mother is coming.” Rumpus noticed because he stood by the window.

“What? Already? It has only been five minutes since we got here though!”

Rumpus was quite disappointed at his sisters lack of reaction to the nickname he had given her and stood motionless for a moment.

“Don’t just stand there!” Asparagus snapped at him “Go and do something and I am not a vegetable!”

Rumpus came to his senses and grabbed his scarf before running outside to meet Mrs. Caroline Macavity, their Mother. 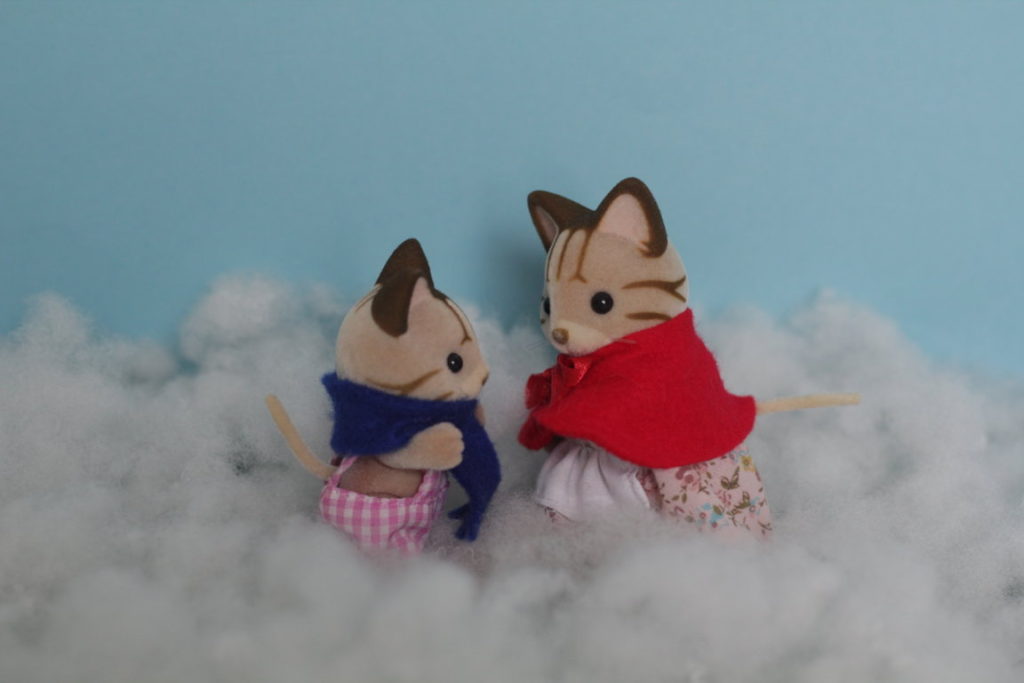 “Hello Mother! Where are you going?” Rumpus asked.

“Rumpus! There you are! Where is your sister Asparagus? Mr. Treefellow wants to talk to her.” Mrs. Macavity inquired.

“Um, she is, um, studying with Willow Cottontail. Yes, yes she is and Rosie Buttermilk too” Rumpus said as convincingly as he could “Yes, she is studying”

“Where is she now? I saw Rosie and Willow helping to dust in the Country Market, they have been there for the past two hours according to Willows Mother, Sorrel.”

“She went to Narnia! Over the rainbow! Where are you going Mother?”

“First I wanted to find Asparagus but I have no idea where that young lady is, so I am going to bake some more Christmas cookies in the Bakery.” 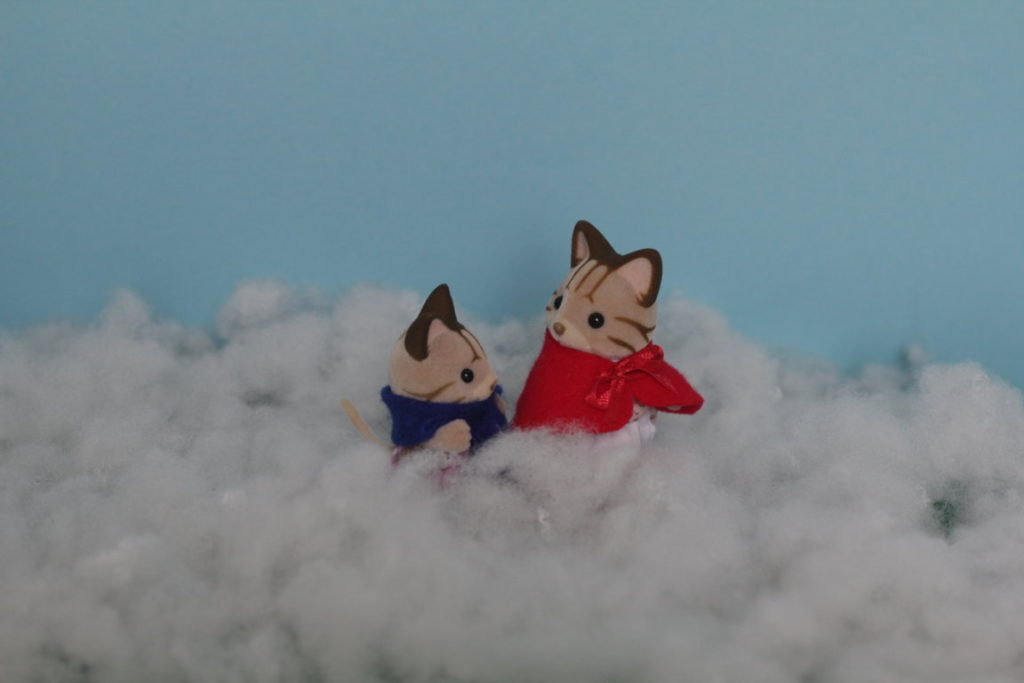 “Why ever not?” his Mother questioned.

“Because it is full of ghosts! And vegetables!” Rumpus replied and started flapping his arms to give effect. Caroline just stared at her son in bewilderment. “No, actually Mr. Beaman wants to see you” he lied smoothly as he realized what nonsense he had just spoken.

“Okay. Oh, I see Evangeline there!”

“No, Mr. Beaman wants to surprise his wife. He said it is urgent and I think he is at the Cottontails house now so” he nudged his Mother “go and see what he wants!” with that, he left his astounded Mother standing there but still, she went to go to the Cottontails house. Rumpus sighed in relief, it would be a while until his Mother found Mr. Beaman, he knew for a fact that he had been going into the opposite direction, to the forest! 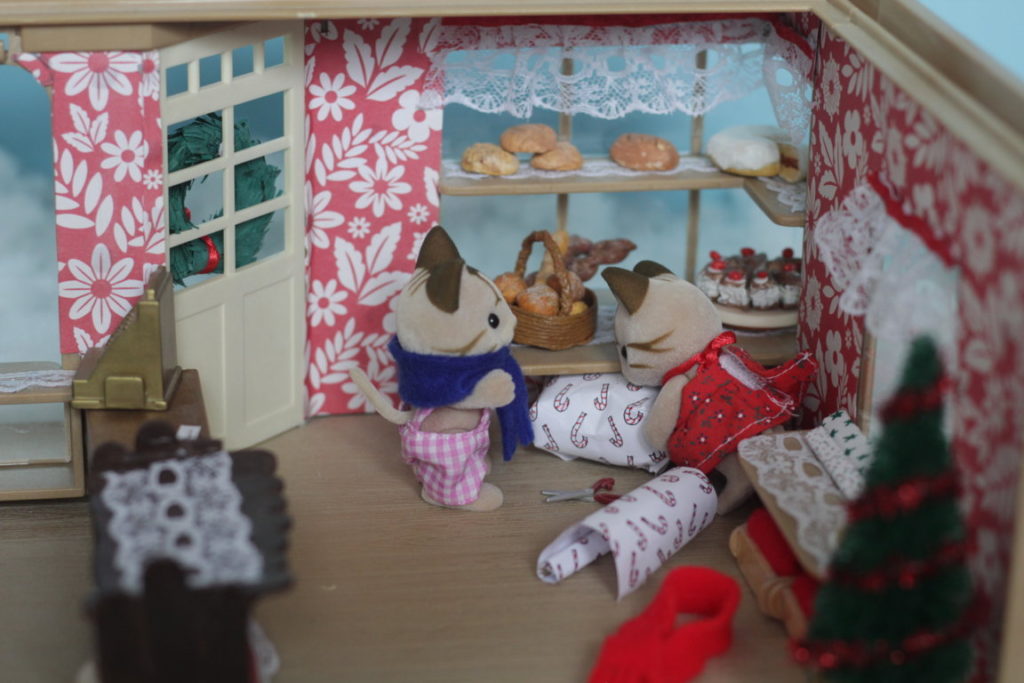 “Rumpus! Where did you put the ribbon?” asked Asparagus as soon as Rumpus had walked in the door.

“What ribbon?” he asked and Asparagus groaned.

“Go and buy one then. A red and gold one just like I told you to a week ago!” she instructed in exasperation. 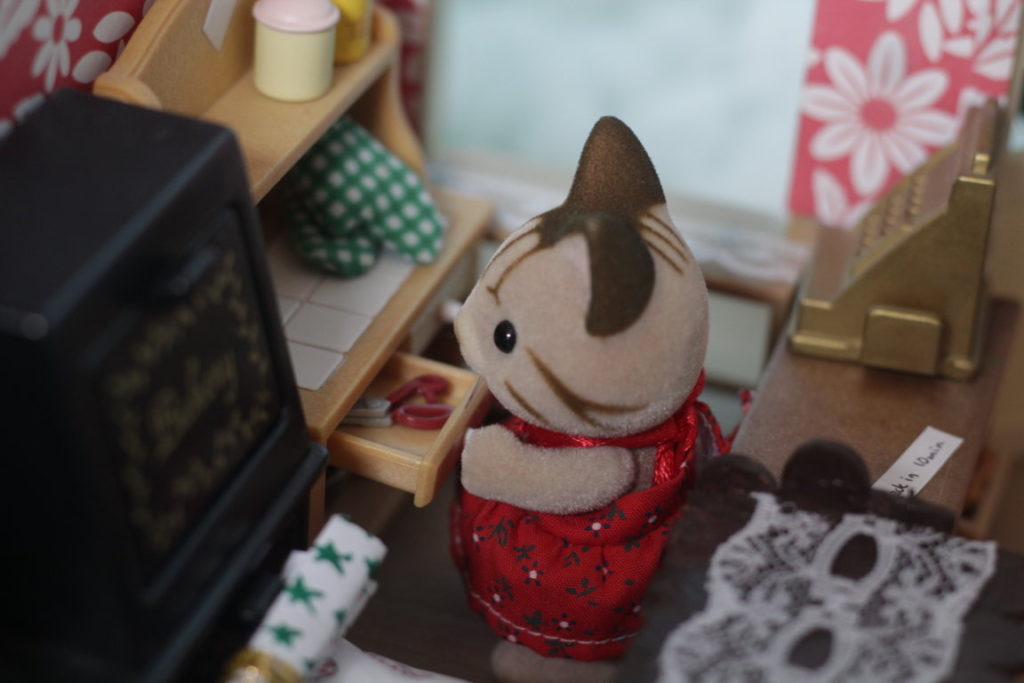 “We must have some ribbon here though” the girl thought and dragged her things behind the counter to peek in the draws there. “Scissors, oven mitts, cake tins, trays, pencil, paper…” she mumbled. Suddenly she heard the door being opened and Asparagus quickly crouched down to the floor. 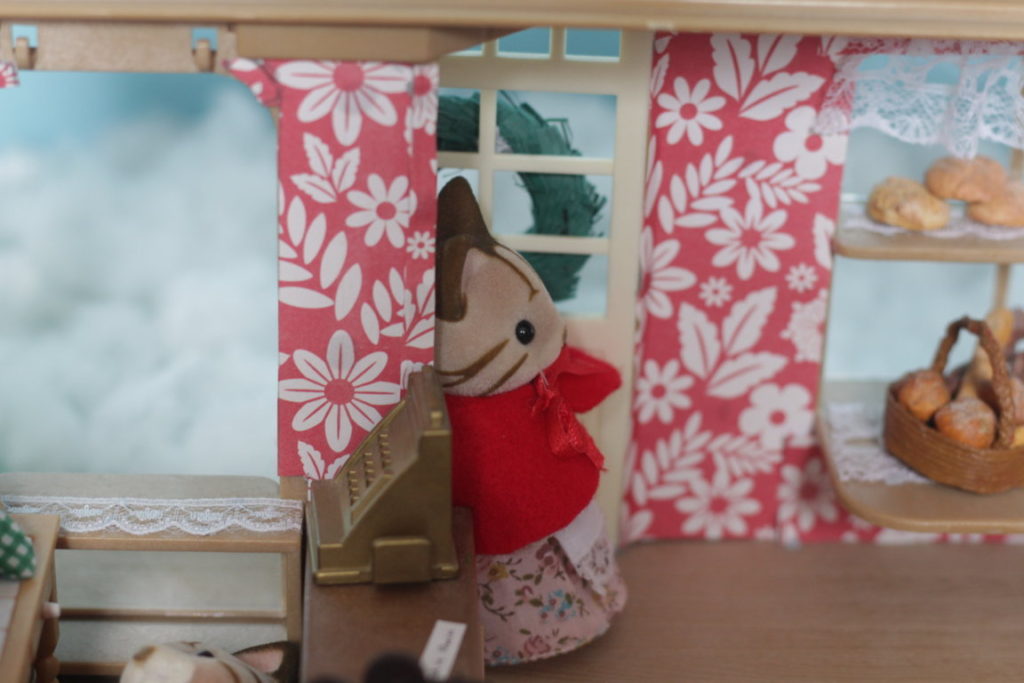 Slowly, she took a peak and her head snapped back as soon as her brain had processed who was there. To her great horror, it was her Mother! There she lay, heart pounding, the almost fully wrapped present at her feet and the wrapping paper beside.

“Gone to the forest has he! I went all that way for nothing, anyway, at least I can bake now.” she heard her Mother say. This was bad news, very bad news! Asparagus thought as hard as she could to come up with something so that her Mother would not see the gift or her.

Luckily, at that moment the Cakebread family walked by and the girl, Melinda, was looking straight at her. Asparagus quickly did a series of hand motions so that Melinda knew what was going on and hoped for the best. 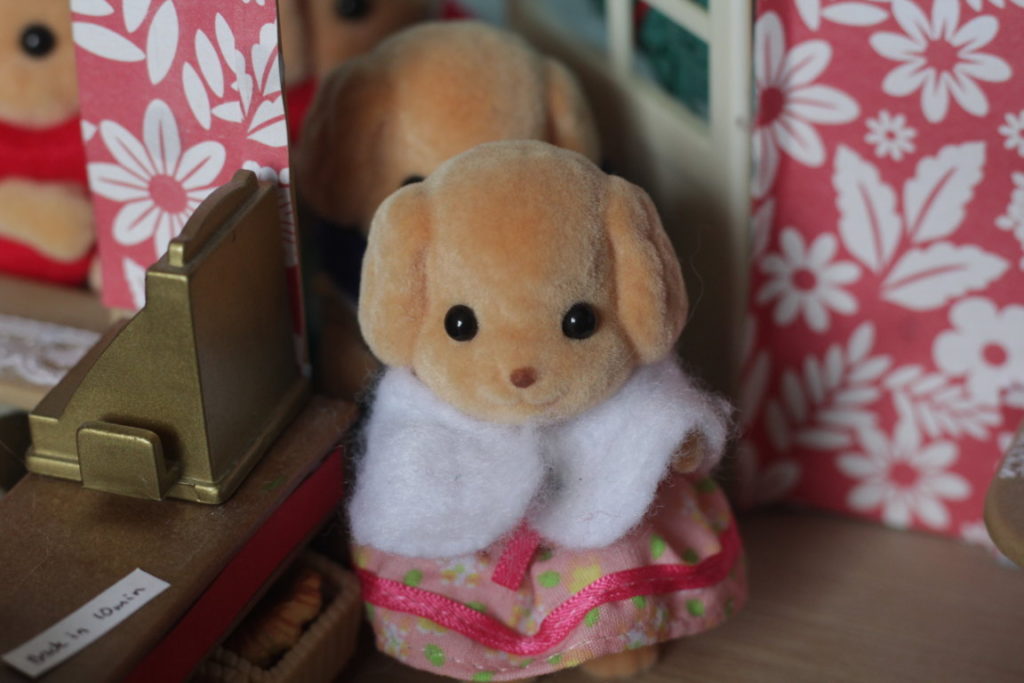 “Hello Mrs. Macavity!” Melinda Cakebread called as she entered the Bakery with her family. 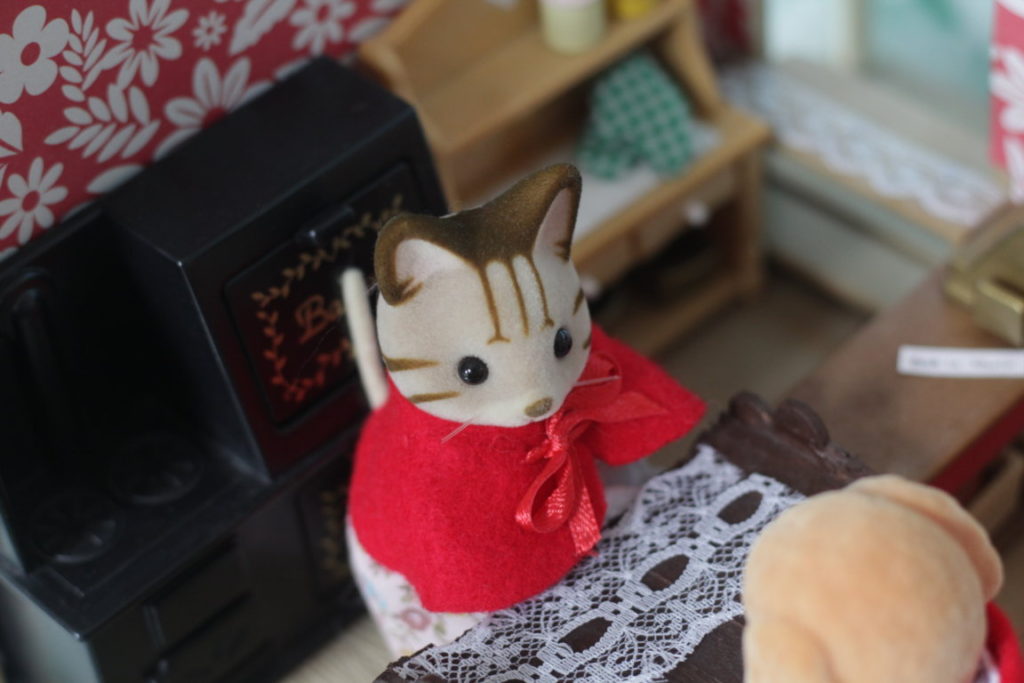 Then everything happen quickly. While the male members of the family distracted Mrs. Macavity by asking her about her Christmas cookies, Asparagus handed Melinda and Melissa the gift and spare wrapping paper.

“Hide these and me” she whispered.

Mother and daughter hid the things behind their backs. Next, Asparagus climbed over the counter, just in time too! She hid behind the poodles quickly.

With a woosh the door opened and Rumpus came in and the threw ribbon to Asparagus in a way that no one noticed his action. The poodle family left, but not without taking the present and placing it outside on the porch. 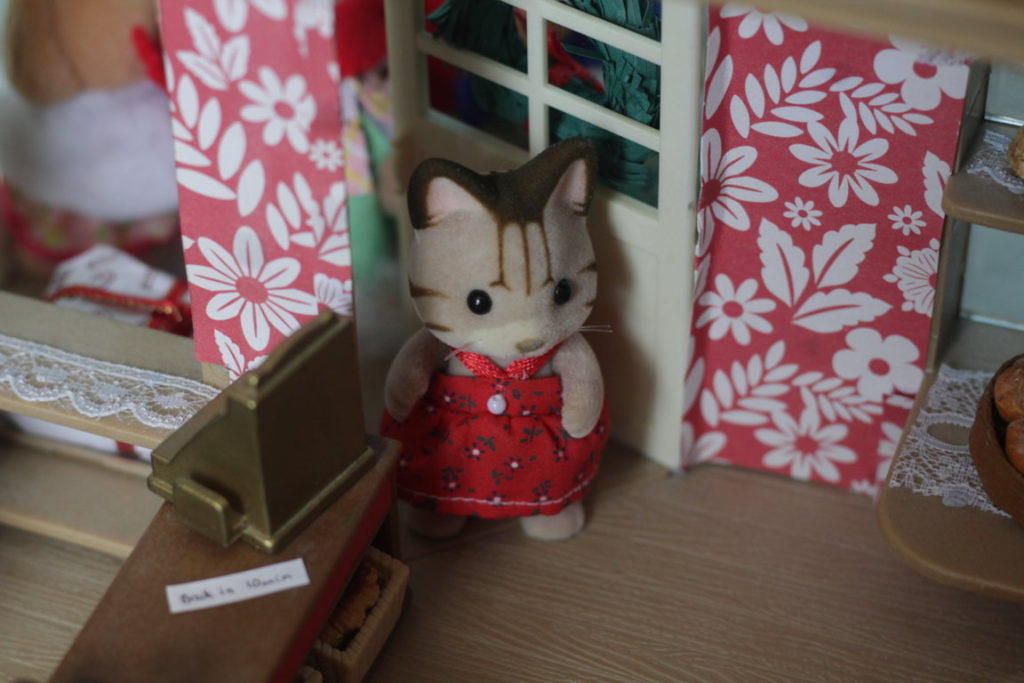 Caroline smoothed down her apron and said “Right, Rumpus you are here and Asparagus…”

“Is here Mother” she replied as she walked into the Bakery. 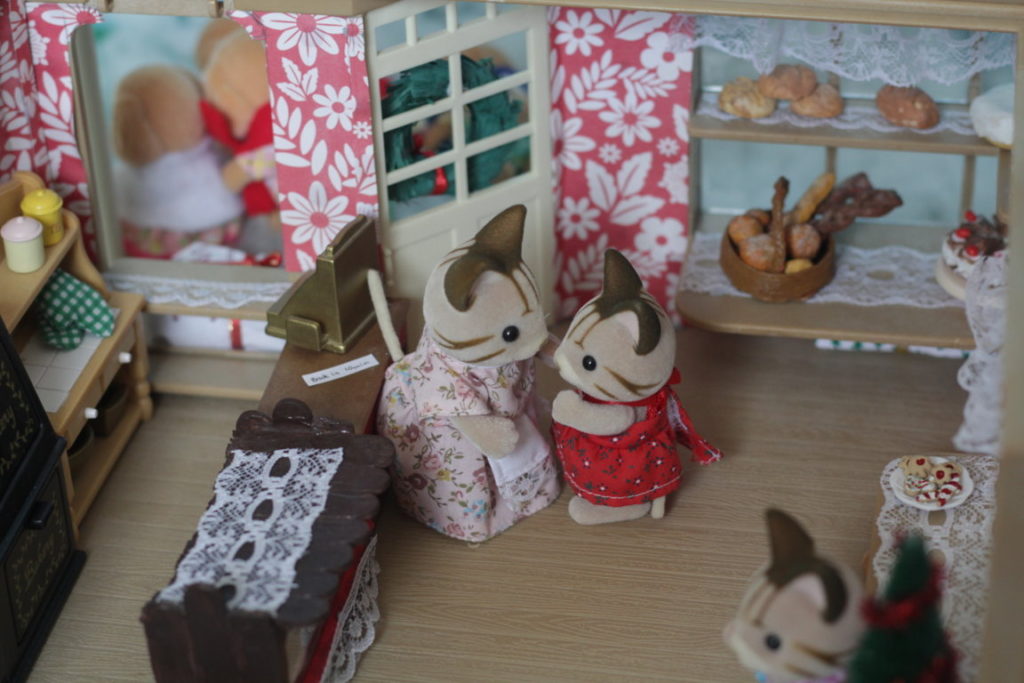 “Asparagus! You naughty girl!” Caroline scolded, running up to her daughter and giving her a big hug. She felt very relieved that her ‘missing’ daughter had returned.  “No one knew where you were and you aren’t even wearing your scarf!”

“Sorry Mother, you see I was with Mr. Beaman and my scarf got a bit dirty and now Mr. Beaman is going to try out the new soap that his wife has on it” she lied flawlessly. Asparagus felt a bit bad, she didn’t like lying to her Mother. 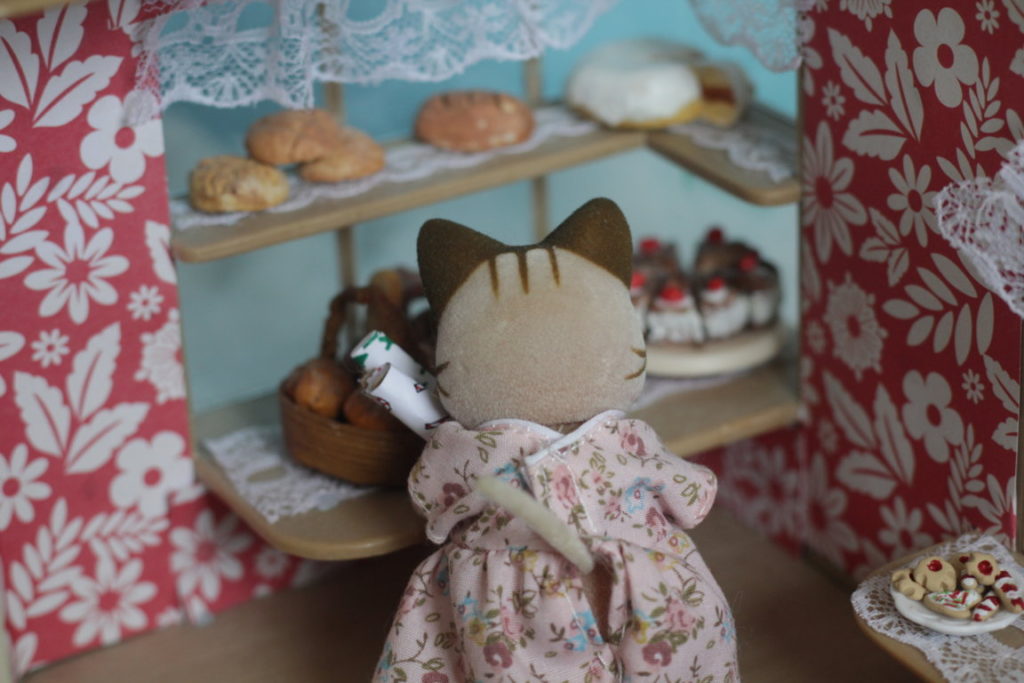 Caroline Macavity noticed something under the display shelf and bent down to pick it up. “What is this doing here?” she thought. 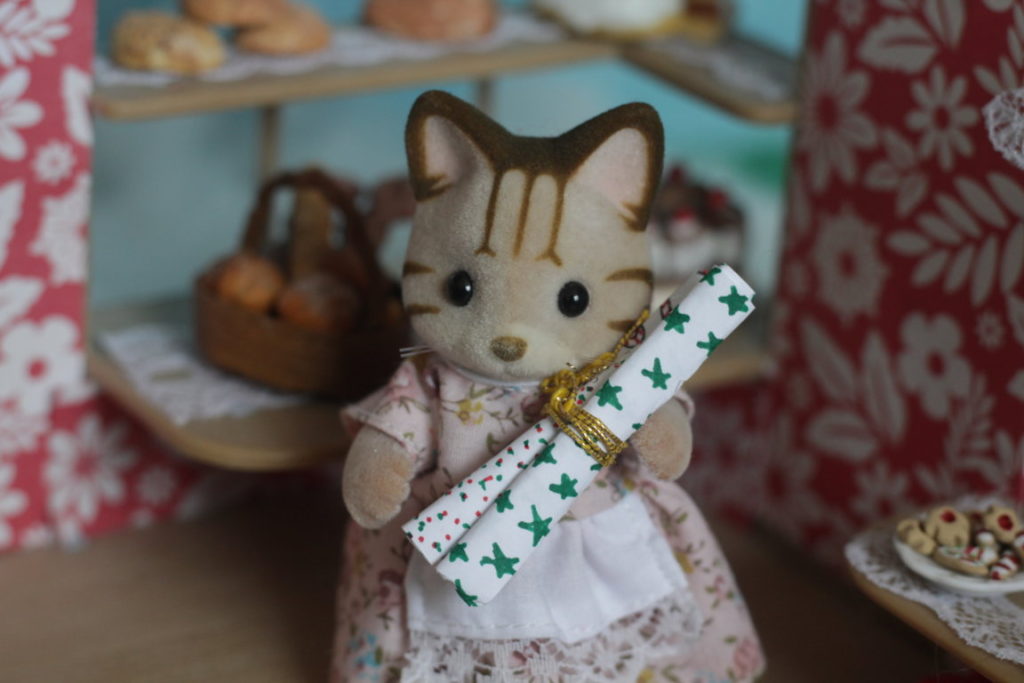 “What is this?” she asked questioningly “I don’t remember owning this type of wrapping paper!” Caroline inspected the wrapping paper, no, this certainly did not belong to her. 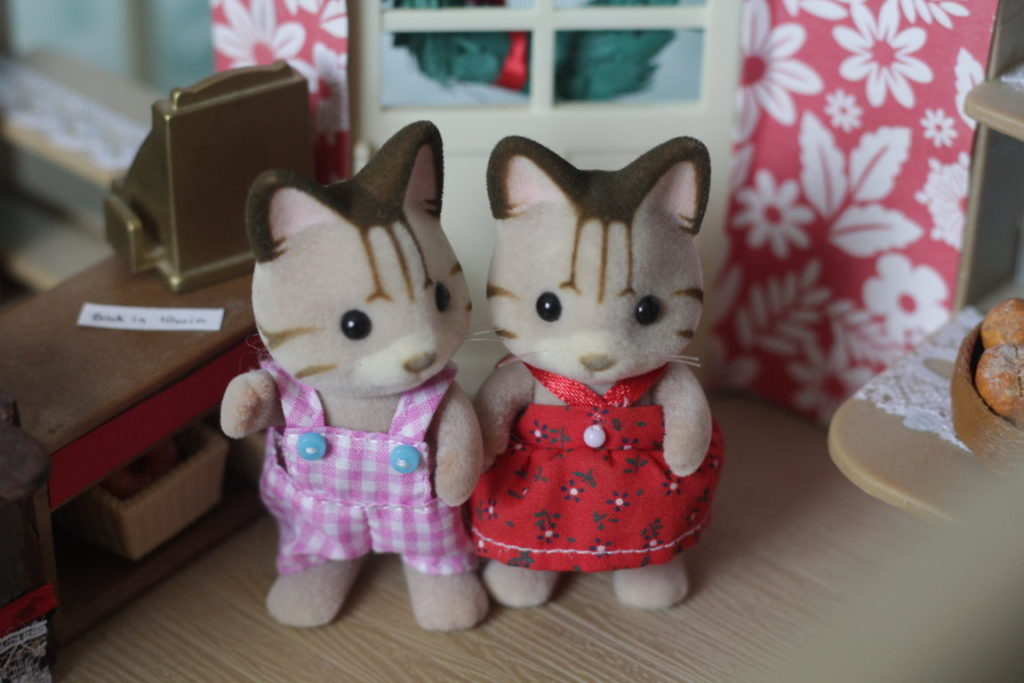 “It belongs to the Vegetable Princess and the Easter Bunny” said Rumpus at the same time.

“I am NOT a Princess or a Vegetable! And the wrapping paper belongs to Mr. Beaman” hissed Asparagus under her breath again and elbowed her brother in the side.

Caroline gazed at the two thoughtfully. “Well, I guess you ought to give it back then. Did he leave it here before he and you went to the forest Asparagus?”. After the girl had nodded, Caroline started to do what she had intended to do before she had gotten sidetracked of searching for the Mayor, baking Christmas cookies.

Hello, how has everyone been? Did you like the story? I am personally quite happy with it. I have another easy dress tutorial (one that people have requested) so I will post that sometime before Christmas if all goes well.

Have a wonderful rest of the week, Emily.