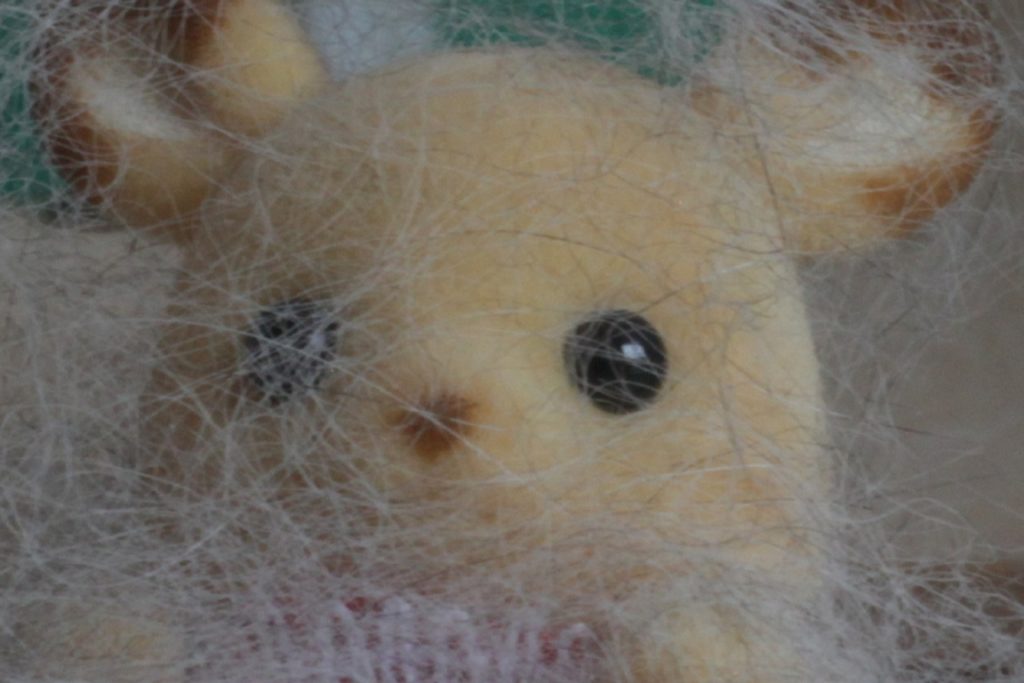 Rumpus’s scream echoed around the room, the ghost was so close to his face! 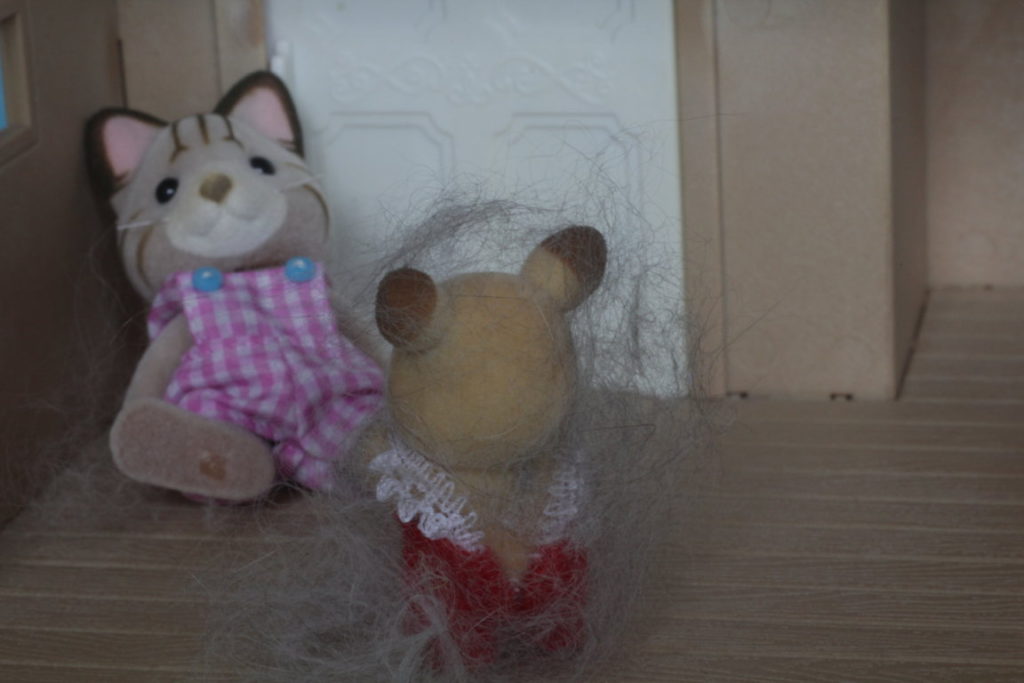 He scrambled back to the door but the wind had pushed it shut and he couldn’t get it open! The thing advanced on him slowly, trapping him in the corner.

“Please, please don’t hurt me!” Rumpus stuttered and pushing himself as hard as he could into the wall behind him, wanting to disappear. 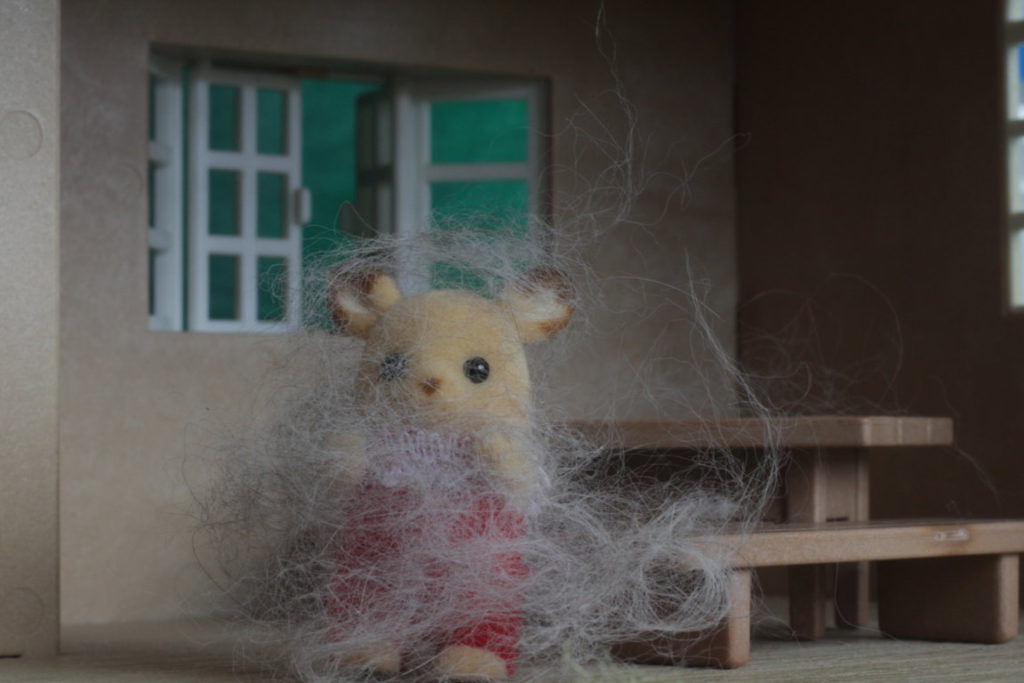 The thing came closer, and closer. Rumpus started to realize that the ‘ghost’ had limbs and did not glide. It had two beady black eyes as well, a monster ghost perhaps?

“No, no, no” he muttered as the thing stop in front of him, only centimeters away from his tense body. It opened it’s mouth…

“Hi, my name is Oscar Buckley, nice to meet you.” it said.

“Hi, my name is Oscar Buckley, nice to meet you.” it repeated.

Rumpus stared “So you, you are not a monster ghost?” he asked hesitantly and saw that really, the ‘monster ghost’ or ‘ghost monster’ was nothing more than a litle boy, a little boy covered in lots and lots of cobwebs. 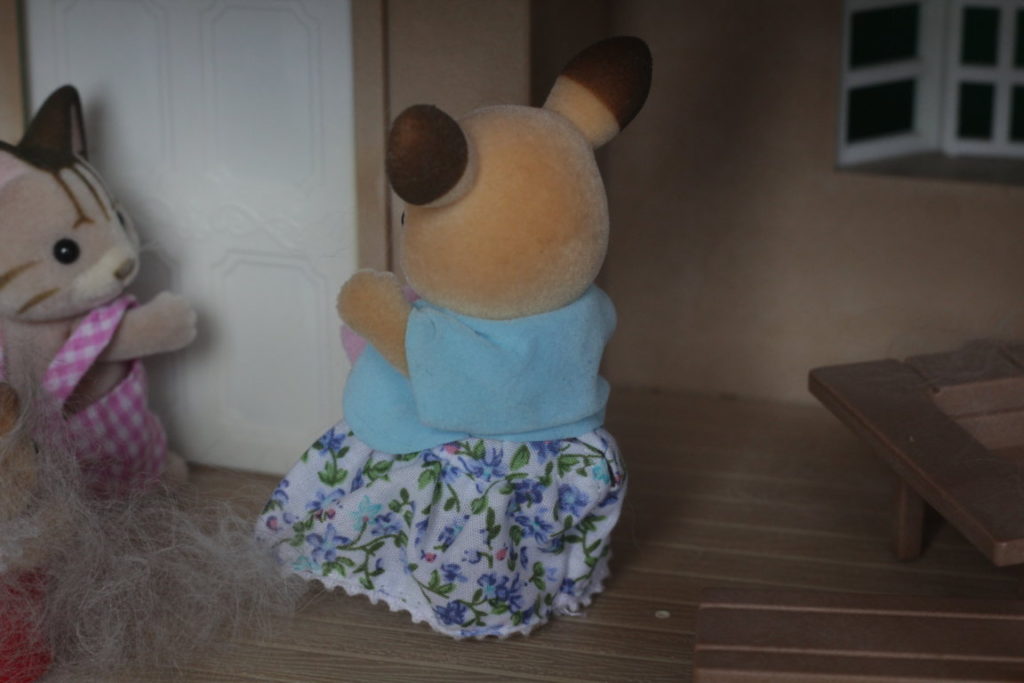 The little deer, Oscar, giggled loudly at how frightened Rumpus had looked.

“Oscar? What is it” a female voice floated down from the top level “I heard voices, who were you talking to?” A female deer in a floral dress with a light blue jacket climbed down the ladder and walked to her son with a wash cloth in her hands. “Who are you?” She asked when she saw Rumpus.

“I am Rumpus Macavity, I’m sorry, I didn’t think anyone was here! I’ll leave now.” he replied hastily.

“No, you must come upstairs and meet the rest of the family, are you from the village?”

“Come on!” Oscar encouraged and grabbed his hand and pulled him in the direction of the ladder. 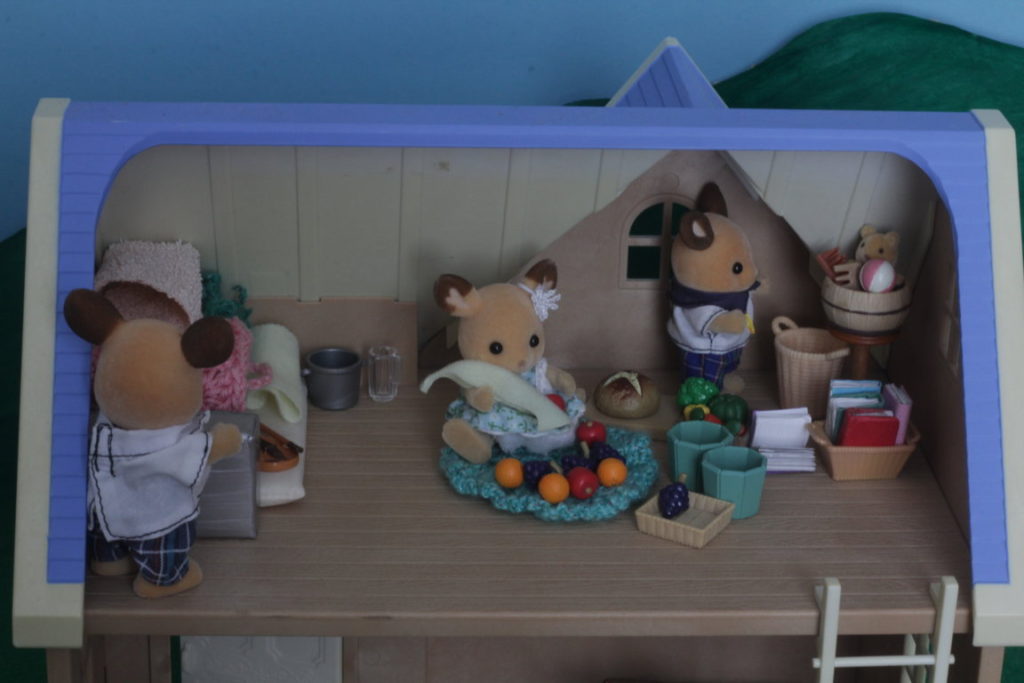 Rumpus had expected the upstairs to look much like it had downstairs, dusty and filled with cobwebs. But it was very different, in one corner were mattresses and blankets, in another stood a small table with a basket of toys and combs. Underneath were more baskets, one with clothes, one with books. In the middle of the room was a rug with fruit on it and a girl was polishing and sorting them. A boy stood by the baskets and a man by the blankets and mattresses. There was also a rather strange silver box that the man stood by, Rumpus wondered what it was. 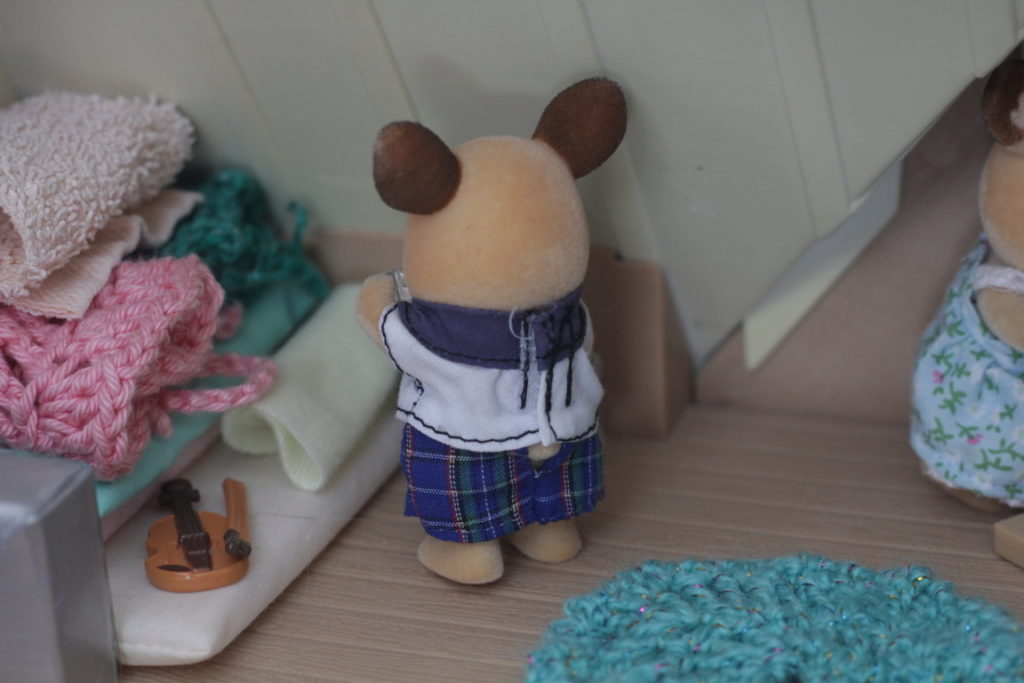 “Would you like a glass of water?” the man who introduced himself as Rupert asked. Rumpus agreed and watched as a boy around his own age walked over to a steel bucket. “That is my son Freddie” Mr. Buckley explained. 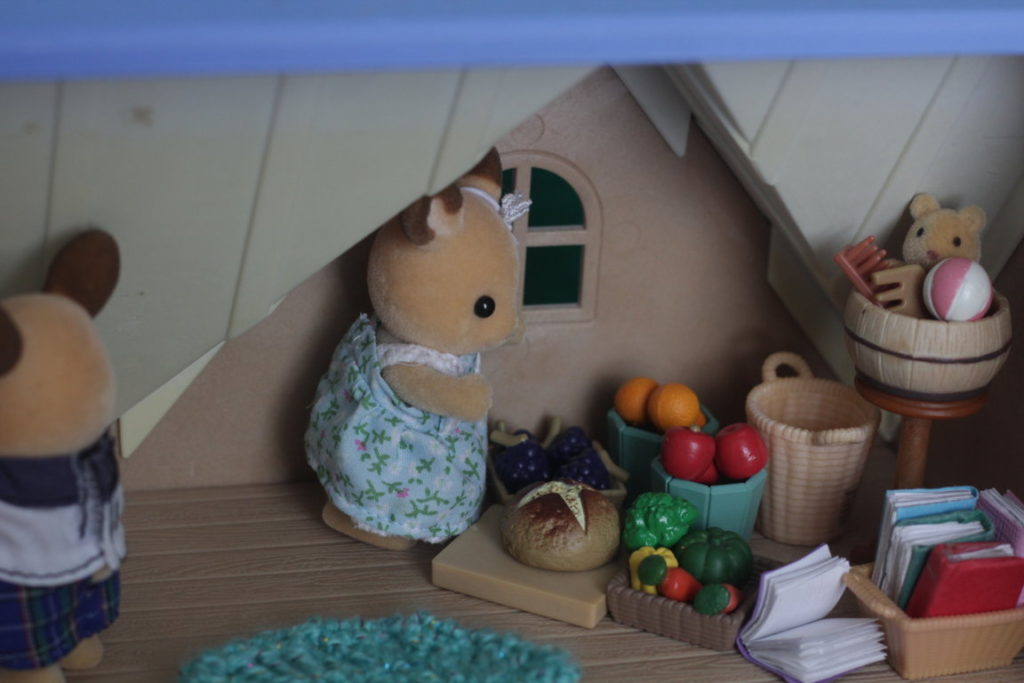 “And that there is my daughter Maria.” he gestured to the girl who had finished ordering the fruit and was now putting them in the corner where the rest of the food stood. “Freddie and Maria will  be attending the local school, do you go there?”

“Yes, all of the children in the village go there to have lessons with Mr. Treefellow. The toddlers go to Nursery with Mrs. Hazelnut.” 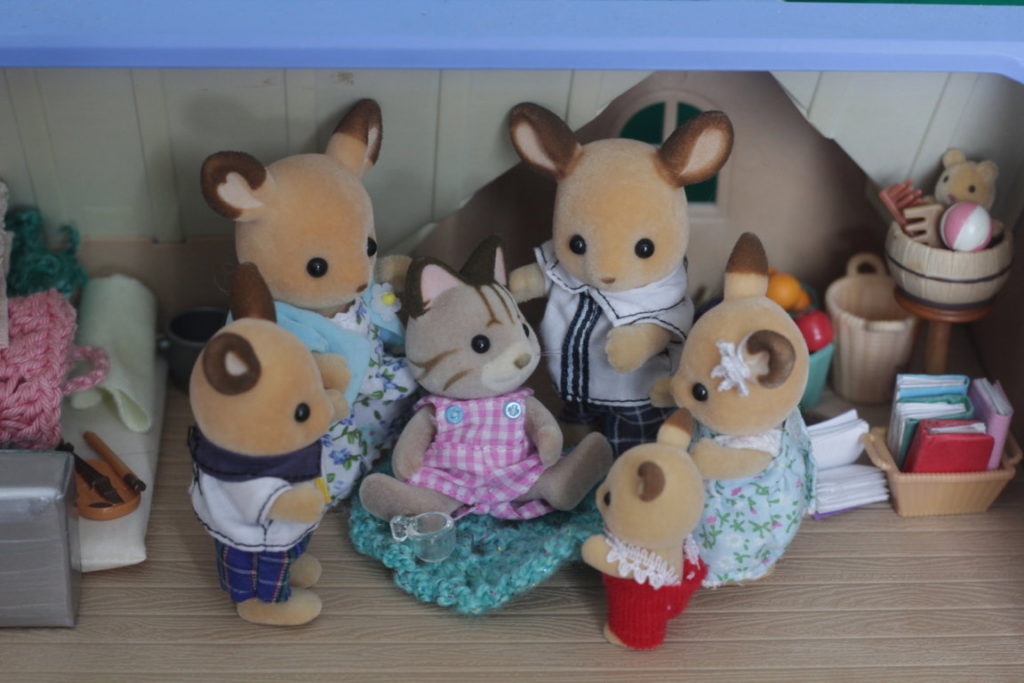 “I hope to make many friends!” Maria exclaimed excitedly, “Are there any other girls my age?”

“Yes, most of us are around 10, I am and my twin sister is also. There are a few younger children which go to school and the oldest student is Harrison Walnut, he is 15!” Rumpus told her and then proceeded to retell some of the adventures he had had around the village to Freddie. He looked at the family crowding around him, wondering…

Surprise! I have decided to make the story into three parts instead of two! I was writing this and thought that I just didn’t have a photo to go with the explanation of why they moved here and since I wanted to post this today, I am going to do a part three. Thank you for your kind and supportive comments on the first part of the story!

Life is more or less busy, it just feels like it is flying by in a blur! I have some projects due soon and have nearly finished one of my assignments to get credits. (Because I am in the top a stream class, we get to start on some NCEA assessments this year to gather some (hopefully excellence) credits for next year. Google NCEA credits if you don’t know what I am on about) Yeah so that is not so fun but apart from that, life is pretty good.

How is your week going so far?